Bhartiya Janata Party, who was first in the race to be elected as the Chief Minister, was sworn in as Deputy CM. Along with Rupani and Patel, 23 other ministers took oath for place in the state cabinet.

It necessitated the change of guard in the state which is facing the unrest owing to Patel quota stir and attacks on Dalits ahead of the high stake assemble elections.

The situation started the brainstorming within BJP leadership for the appropriate face. While Anandiben Patel suggested Nitin Patel as her successor, Amit Shah stood firm on Rupani’s name and finally BJP’s cetral leadership intervened to solve the deadlock.

Thereafter, as the compromise formula, Vijay Rupani, the state party chief and Amit Shah Loyalist, was zeroed in as CM while Nitin Patel was elated as his Deputy.

Selection of Rupani, who belongs to Jain Baniya community, is being seen as a clever move by the party to avoid the impression of favouring any major segment of the society over others.

Rupani, whose political grounding belongs to RSS, is being assigned the responsibility of leading the saffron party in the state where it is struggling hard to retain its political base. The party has also been affected by absence of leaders of Modi’s calibre

Anandiben Patel took over the charge as CM after Narendra Modi, then CM of Gujarat, was elected as the Prime Minister of India. However, under Anandiben, BJP suffered losses in Civic Polls last year while Congress gained handsomely in lack of strong leadership of the saffron party. 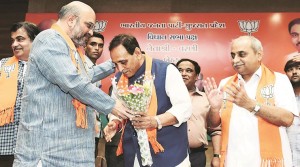