Home India UP Girl Wrote A Letter In Blood To The CM Pleading Actions... 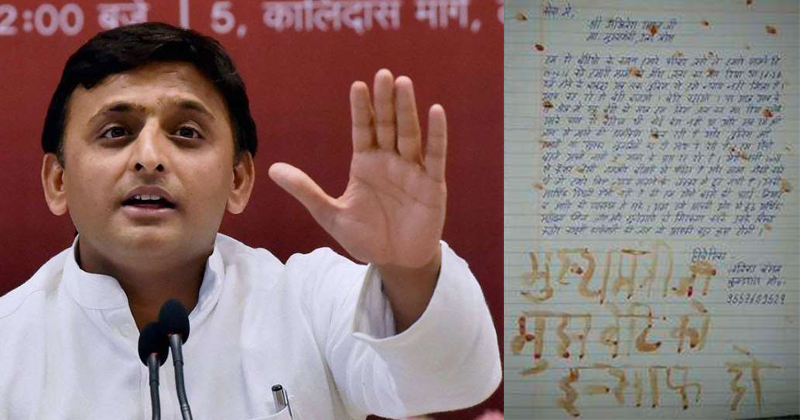 Latika said that her mother was burnt alive in front of her and her younger sister on 14 June. The reason her mother was murdered because she could not bear a son.

Latika wrote “You talk about Beti Bachao, Beti Padhao (Save the girl child, Educate the girl child) but a daughter was burnt alive in your area just because she had two daughters. And now we are getting life threats and the police is not helping us but they accused.”

The government’s Beti Bachao, Beti Padhao campaign aims to generate awareness about the declining child sex ratio (CSR). It also focuses on the education of girls and various issues of women empowerment.

Latika and her younger sister Tanya who is 11, live with their maternal grandparents in Devipura, Bulandshahr.

She sends the letter to the CM through fax and also posted the letter on Facebook. She said that this isn’t the first letter she wrote to the CM. Latika wrote her first letter to chief minister Akhilesh Yadav earlier in July. She said perhaps her blood on the letter would make CM understand her trauma and appeal for justice.

Latika’s father was arrested a day after the incident and was sent to jail but she said that other members of the family who were part of the murder and are named in the FIR should also serve jail time.

Latika alleged that Police is not acting against all the accused despite repeated appeals but the senior superintendent of police of Bulandshahr, Anees Ansari stated that an investigation on the case is going on and strict action will be taken against the criminals but only on the basis of evidence.