New Delhi: Prime Minister Narendra Modi is known for impressing people with his small yet significant gestures. Often his humanitarian, emotional and heart touching gestures give us a reflection of his grounded nature and humble upbringing.

In a recent example of such behavior, PM Modi proved how sometimes it’s the small things that make a person big.

The incident is from the ongoing Lok Sabha session where PM Modi presented a picture of utter discipline.

PM Modi was walking down the stairs towards his seat at the front but stopped mid-way. He stood next to Mr. Naidu who was presenting his speech, and remained standing there calm and composed until the speaker completed his address.

Only after Mr. Naidu sat that PM Modi progressed towards his seat, making it a surprisingly pleasant gesture.

It is worth mentioning that PM Narendra Modi had stunned everyone when he bowed down and touch the stairs of Parliament while entering for the first time after winning the general elections. It was his respect for the constitution and democracy of India. 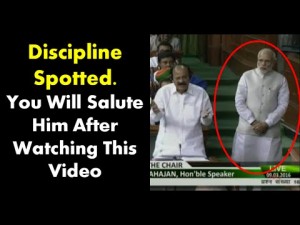