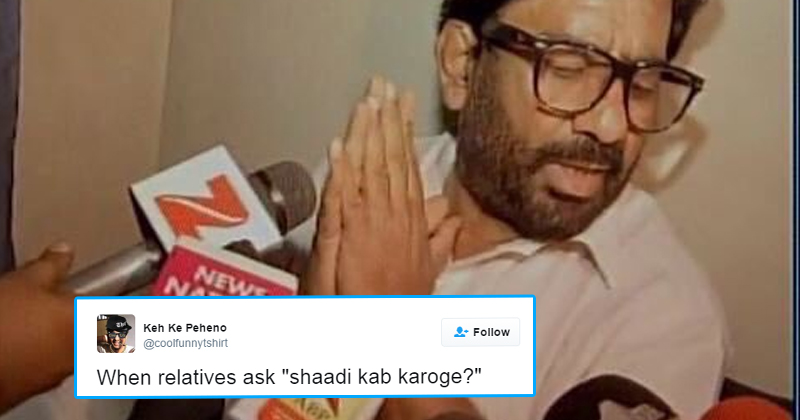 Ravindra Gaikwad, the Shiv Sena MP who has been the talk of the town for misbehaving with the senior Air India official, is probably thinking of never doing it again. We know that his powerful position earned him immunity from law and elsewhere in the political circle but social media. Oh No! Nobody messes with the open mind bashing enthusiast here as all they want is a ‘Bakra‘, so that they can teach him a lesson worth remembering every time he/she thinks of behaving in a brash way.

It seems that people here in social media worry least about Ravindra Gaikwad’s power and position. On the internet, there are millions of people who never back down of speaking their minds and they are doing it again and Gaikwad must be feeling hell on earth. How?

Well, an image of Shiv Sena’s MP is going viral on twitter and creatives minds here, are using that picture to create some seriously burning jokes. We bet you are gonna love them all.

When someone offers me non-veg on #Tuesday pic.twitter.com/oZd5MmO12O

Barkha Dutt and Rajdeep Sardesai when somebody says Bharat Mata Ki Jai in front of them pic.twitter.com/bj233ftfIf

You can be anything you want in real life but here on social media, your powers won’t make people shut their mouth because it’s a free nation and people are creatively using their freedom of speech. (well, technically freedom to write) Wink!