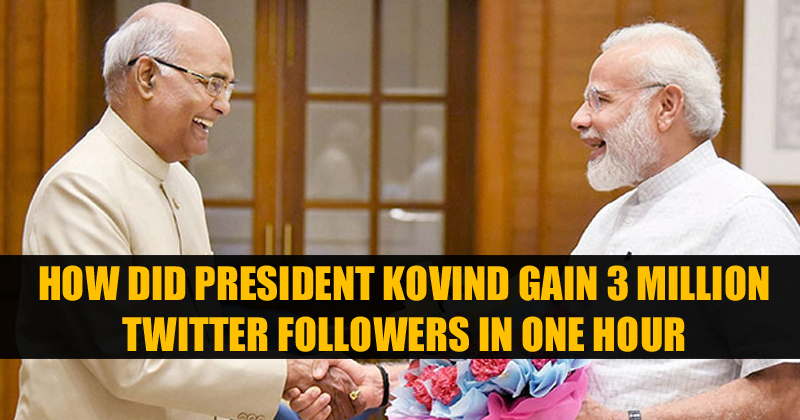 Ram Nath Kovind’s first day at office as the 14th Indian President was everything but a poised event. The new president made a thumping debut on Twitter and followed it by around 30 posts, most of which were from his inaugural speech and swearing-in ceremony.

Ram Nath Kovind won the 2017 Presidential Elections by a majority of 66% votes against Opposition’s candidate Meira Kumar to succeed former-President Pranab Mukherjee and as the Rashtrapati Bhawan had its new occupant, so did the digital transition of the President of India’s Twitter account, @RashtrapatiBhvn.

Through most of Ram Nath Kovind’s first day at office, #PresidentKovind remained the top national trend on Twitter and several Cabinet ministers, as well as state chief ministers, chimed in with congratulatory tweets, however, it was Kovind’s first tweet that got all the spotlight as it was retweeted over 6,000 times and ‘liked’ over 20,000 times within hours.

Honoured to be sworn in as the 14th President of India; would be carrying out my responsibilities with all humility #PresidentKovind

The next Tweet from the President’s official handle was targeted towards making India an Economic as well as a Moral leader, followed by a picture of Ram Nath Kovind’s first day at office.

Here are some other tweets from President’s official handle that are were retweeted and liked by thousands of Indians on Ram Nath Kovind’s first day at office.

Our diversity is the core that makes us so unique #PresidentKovind

However, the question that the nation has been seeking an answer to is, how did President Kovind gain 3 million Twitter followers in one hour? The fact that it happened, is pretty impressive by all means, however, it still sounds too good to be true, isn’t it?

Here is what actually happened.

Official Twitter accounts of the President, Vice President and various Ministries (@HMOIndia, @PMOIndia etc) are digital assets of the government. Twitter has a policy for digital transition when the subjective occupant changes to ensure continuity to preserve the digital history of the previous occupant. This was followed in the case of @POTUS handover from Barack Obama to Donald Trump and the same policy is being followed for the handover of President of India’s official account, @RashtrapatBhvn, from Pranab Mukherjee to Ram Nath Kovind.