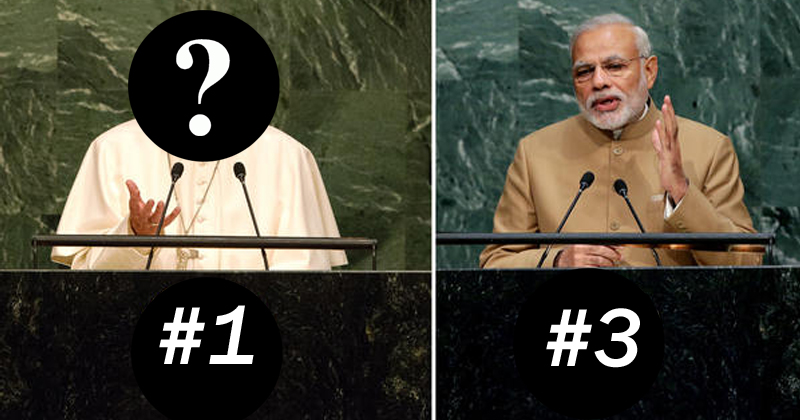 As per the Twiplomacy Study 2017 by Burson-Marsteller, Prime Minister Narendra Modi has been named the third most followed world leader on social media. PM Modi comes third to Pope Francis and Donald Trump. Even though the study was done in respect of major social media platforms like Twitter, Facebook, YouTube, Instagram and Google+, Twitter seems to come out as the deciding factor. Pope Francis has a total of some 33 million followers, whereas Donald Trump comes in second with his 30,133,036 million followers and Narendra Modi’s personal account comes in third with 30,058,659 million followers, which is too close to the second position on the chart.

In an age of social media, reaching your audience has become too easy for everyone with an audience, and a huge part of that, are world leaders. Various countries and their leaders are trying their best to reach their audience in the most real way possible, without having too many middlemen in between. As Twiplomacy said, Social Media has become diplomacy’s significant other.

While some leaders and their administration have reached the top most platforms for communicating with their people, many leaders have gone beyond Twitter, Facebook and Instagram. Many leaders have now taken resort of new apps and platforms like Snapchat and periscope. Like Argentinian President Mauricio Macri, who is also active on a platform like Snapchat to his much younger audience and potential future voters.

As per the study, Twitter remains to be the social media of choice for government and foreign ministries to reach to their people. Burson-Marsteller’s research team identified 856 Twitter accounts belonging to heads of state and government, and foreign ministers in 178 countries, representing 92 percent of all UN member states, with a combined audience of 356 million followers.

Former U.S. President Barack Obama was said to be the absolute king of Social Media and an uncontested political leader of the Digital world, however, after his exit, the position has now been awarded to Pope Francis with more than 33.7 million followers on his nine language accounts.

Marking his debut on the list of most followed leaders in the world is U.S President Donald Trump with his 30.1 million followers takes the second spot. Over the course of election campaign last year, Donald Trump gained more than triple the amount of his original followers, and ever since taking office on 20th January 2017, the numbers are constantly growing.

Third on the list is Indian Prime Minister Narendra Modi with his 30 million followers, plus the fourth spot goes to the institutional account @PMOIndia which has more than 18 million followers. Apart from this, Minister of External Affairs of India, Sushma Swaraj is on the 8th spot with her more than 8 million followers. Swaraj is said to be one of the most easily reachable ministers in the country who has time and again went ahead with people’s problems and has even gone ahead to solve them, in no time.

Apart from being the third most followed leader, Narendra Modi is also the second most influential leader, as per the Twitter statistics. With 35 million interactions in the last 12 months, Modi’s overall interaction rate is at 0.04%, while Trump tops the list with five times the interaction of Modi’s and an interaction rate of 0.34%.

There are still many countries that are able to connect to their public because of the lack of social media presence, which is an essential way of running a government these days. When PM Narendra Modi decided to work on the footsteps of the Former US President Barack Obama, who was the first world leader to join Twitter, by reaching his people through the medium of social media, it was considered to be a revolutionary step. And, so did many other countries, however, with the current situation regarding President Donald Trump and Twitter, the same seems to be under a huge threat.