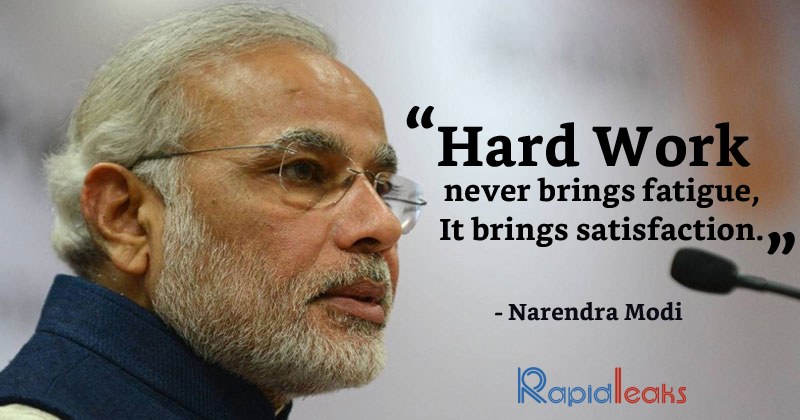 Narendra Modi, the 14th Prime Minister Of India, is currently one of the most influential people in the world and has literally taken the Indian political scenario by storm while making the country a world power in a short duration as the Prime Minister. Narendra Modi is respected all over the country as well as around the world and his charismatic personality, intelligence and wit have made him a highly valued international figure.

Narendra Modi has great communication skills which is rare to find in Indian politics and he is known to be one of the best orators the country has ever seen. While his command over language is one of the major reasons which has lured the nation by his side, Modi’s vast knowledge in various fields has also made him a force to reckon with on the center stage, which is only because Narendra Modi does his homework well before getting into an issue.

Born on 17th September 1950 as the third child to Damodardas Mulchand and Heeraben Modi, who are proud parents of six children, including Narendra Modi, he is considered as one of the most successful self-made political leaders in the world as his family belongs to an oil-pressing community which is considered as the Other Backward Community (OBC) in India and has no political background at all, in his family.

But without any doubt, the fact that Narendra Modi is the most charismatic leader of the country, needs to be acknowledged as he knows a lot about what he is talking as well as his image of a quick decision maker, is nothing but a result of a great insight.

Narendra Modi began his political journey as a member of Bharatiya Janata Party (BJP), and then rose to the position of the Chief Minister of Gujarat while retaining office for four consecutive terms and thus proving his efficiency as a leader.

The pinnacle of Narendra Modi’s illustrious career was the day when he was elected as the 14th Prime Minister of India in a landslide victory which saw his party winning the elections as a majority without a coalition, for the first time.

Although Narendra Modi was elected by millions to be their leader, but not many really know that much about this highly regarded man, and therefore we decided to throw some light on Narendra Modi’s life with some interesting facts.

These were the 10 little-known facts about Narendra Modi and while he is considered as one of the most promising Indian personalities, the people of World’s Largest Democracy have high hopes from him, as well.

Did we miss out on anything about Narendra Modi Facts? Do let us know in the comments section below.