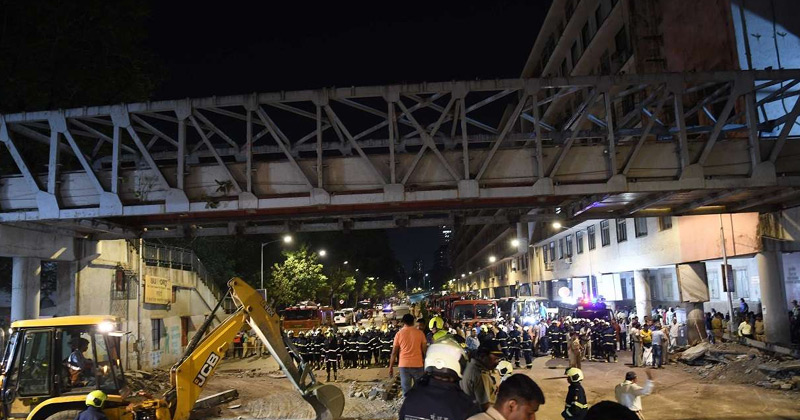 Falling bridges in India aren’t a new thing. They’ve happened in the past. They would happen again. But what is a problem, nonetheless, is the recurrence of them.

Anyhow, in Mumbai, in what’s become the latest shocker, a bridge that collapsed near CST (Chhatrapati Shivaji Terminal), has earned the wrath of Chief Minister Mr. Fadnavis, who, according to latest reports has ordered the police to take strict action against those responsible.

That said, what exactly happened and when, right?

6 people were killed and 33 injured after a portion of the foot overbridge near the Chhatrapati Shivaji Terminal collapsed on 14 March, 2019, just a few hours ago on Thursday.

The incident, needless to say, has shocked the community and unraveled a fact that most are aware of but perhaps do not pay enough heed to. Why is it that Mumbai, undoubtedly the biggest contributor to tax collected from every state in India still not getting the kind of infrastructure it deserves?

To continue further, if one truly wished to understand Mumbai’s urban chaos then perhaps visiting the following statistic would help.

In the past 2 years, as many as 3 tragedies have occurred in Mumbai. These highlight the state of Mumbai’s crumbling infrastructure, which, funnily enough, despite the citizens, government, and all related bodies being aware of the gravity of the situation haven’t quite been able to fix.

While the perspective here isn’t about who’s to be blamed because perhaps the country knows that the BMC isn’t exactly world’s most efficient organisation anyways, what really matters is what action will actually be taken to hold those accountable because of whom this situation arose.

The case of Mumbai stands out in particular because it’s not that the city hasn’t witnessed skirmishes and unforeseen events in the recent past. On a completely different note (read context), according to 2017 statistics, as many as 3,160 road accidents took place in Mumbai, which, apart from appearing as an urban eyesore proved to be the sixth-highest in India overall.

Anyways, refocusing on the actual problem, a piece of news that is trending on social media as we speak, Maharashtra CM Fadnavis had shared post the incident in his appearance that safety audits had been carried out in 445 foot overbridges. And that wasn’t all.

Apparently, minor repairs had been carried out on the CST bridge six months ago as part of the audit.

What’s important to note especially from the perspective of the Mumbaikar for it is in his and her interest to know is that the last time around when the Andheri bridge collapsed, many students couldn’t even take their examinations because of the infrastructural errand.

That said, the gravity of the matter concerning the foot overbridge near the CST is right in front of those who can handle it. The point is- will they?

That said, to quote NDTV directly on the matter, the Railway Ministry has said the overbridge was under the control of Mumbai’s civic body, the Brihanmumbai Corporation – Sena lawmaker Anil Desai has denied the claim. State minister Vinod Tawde said both Railways and the civic body would investigate the matter.