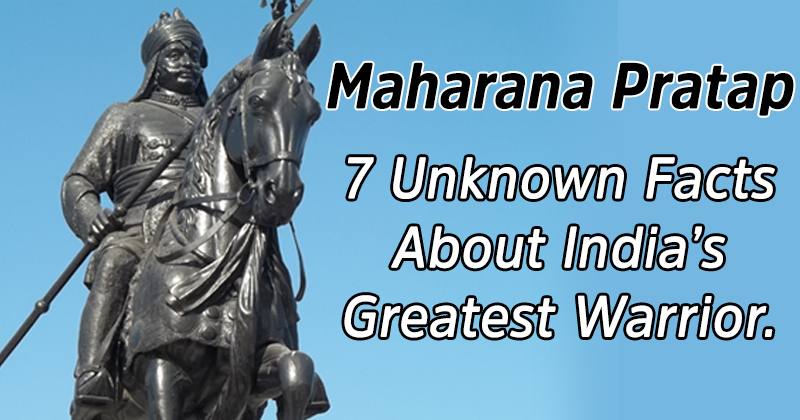 Men die every day but legends stay alive forever. Maharana Pratap is one of those legends who not only conquered great achievements but also carved his name in the Indian history as one of the greatest warriors. Born today on 9th May in 1540 is regarded as one of the bravest men ever. He was the ruler of Mewar and was born to the founder of Udaipur, Udai Singh II, and Maharani Jaiwanta Bai. Remembered for his onslaughts against the Mughals, he has been an inspiration to many. For long he has been a subject for books in school, films, and serials in Indian TV and Bollywood Industry.

Bharat Ka Veer Putra- Maharana Pratap is the one of the most famous television series based on him which provides an insight of his life. Though the series tells a lot about his journey but there are still so many things that we don’t know about this Indian hero.

On the 476th Birth Anniversary of Maharana Pratap we have compiled 7 unknown facts about him for you. Let’s recall the brave hero of Indian history.

1. The height Of Maharana Was 7 feet 5 inches

As unbelievable as it sounds, it is believed that Maharana Pratap was 7 feet 5 inches tall. He wore a armour that weighed 110 kg and was always ready to fight with his rivals as he always kept two swords each of which weighed 25 kg. His armoures and swords are open for a public display in a museum in Udaipur, Rajasthan.

Yes!  Maharana had 11 wives and had 17 sons and 5 daughters from them. The daughter of  Rao Ram Rakh Panwar, Ajabde Punwar was Maharana’s first wife. His son Amar Singh, was born to Ajabde.

Maharana is the first Indian freedom fighter who never surrendered to Akbar.  He was the only Rajput king who was ready to defy Akbar from the 16th century and Maharana succeeded in defying Akbar. There was a time when Maharana thought of giving up but famous Rajput poet Prithviraj wrote a letter to Maharana and convinced him not to give up.

4. In the battle of Haldighati, Maharana Pratap’s valour was on display

When Akbar decided to fight a battle against Maharana Pratap in 1576, he established his headquarters at Ajmer. In this battle Maharana used the Guerilla Warfare tactics to defeat Mughal army. Akbar had  two lakh soldiers whereas Rajputs were only twenty-two thousand but in 1582 Maharana inflicted a crushing defeat to the Mughals in Dewair. Most of his lost Land was regained except for Ajmer and Chittor.

5. Maharana was the first Indian king to use the ‘Guerrilla warfare’

There was a time when almost all the land under Rajasthan was in possession of Mughals but Maharana fought or 12 years to save mewar from Mughal Emperor Akbar. The guerrilla warfare had been in existence before Maharana’s time but he was the first warrior of India to use it in an organized form. Using guerrilla warfare Maharana succeeded in giving a blow to the Mughal army. Akbar was indeed a great fighter yet Maharana fought with him with great confidence. Akbar tried his best to defeat him but he remained unbeatable till the end.

6. Maharana was associated with the indigenous tribe of Mewar – Bhils.

The local tribe of Mewar was called Bhils and the people of the tribe were always stood beside Maharana. They fought with Maharana in his most of the fights and stood till the end for him. Many of the Bhils sacrificed their lives for the honor of Maharana. According to a famous folklore, Maharana kept a promise that until he wins back Chittor he will eat off Patras and will sleep on a straw bed. Rana did not get Chittor back and even today many of his Rajput followers keep a leaf under their plates and a straw under their beds.

7. Maharana Pratap was against his son Amar Singh for capturing women.

There is a famous story of how a woman from the camp of Rahim Khan-e-Khana was campaigning against Maharana Pratap with a Mughal officer. She was caught by Maharana’s son Amar Singh and brought in front of Maharana. When Maharana Pratap got to know that the woman was arrested from the enemy camp of Mughals, he ordered an instant release for that woman and sent her back to her camp.