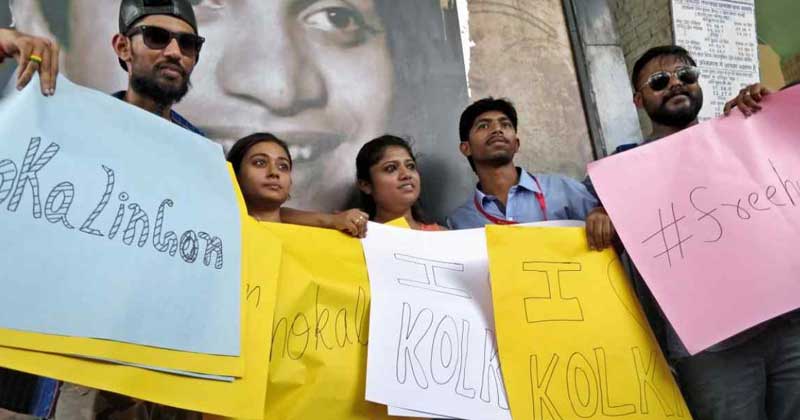 Moral policing is synonymous with India and its people. Somehow, the people of our country think it’s their birthright to police someone on things that they don’t have anything to even do with, in the first place. Moral policing can actually be identified as Indian public’s favourite time pass at public places which often pushes heavily on anything and everything that a girl does and any kind of PDA. Even hugging. Yes, even that too. Sad that fighting, foul mouthing and discriminating someone on cast, race, language, and colour doesn’t count in this moral policing ethics.

Recently a news came out when a young couple was beaten by the public in Kolkata all because they’re hugging each other while traveling in the metro. Yes, one of the most well-read and literature induced cities in the country was literally beating a young couple for hugging in public.

As soon as the news came out, outrage on social media was something that everyone expected and it did happen. People came forward with their reaction to the incident and said, “A young couple embraced in Kolkata metro. It made a bunch of frustrated old losers angry. They beat them up. Scenes of hatred are allowed. Scenes of love are considered obscene.” Here are some more reactions to the entire incident.

This could be us.
But, we live in a country named India where you can rape women in public buses but can't hug her in metro. pic.twitter.com/ELBBHLveLA

Beti Bachao Beti Padhao and if the same beti shows #PDA usko publically peet do. Waah bc.
Couple thrashed in kolkata metro just bcz they were hugging. This is why west bengal should have new governance, it's in desperate need if it.#EndMoralPolicing#WestBengal @MamataOfficial https://t.co/737nO8tISx

Did Kolkata Metro come out in support of passengers who thrashed a young couple? Shockingly, it looks like YES. It did, or whoever is handling its social media account did, and is now trying to deny the episode instead of taking action. https://t.co/B6aTCCXqSK via @AltNews

Shame on these so called "moral police" people who thinks they are care takers of moral fabric of country, it was a couple loving each other in a metro. And shame on Kolkata metro, GM for defending moral policing #HokAlinggon #হোকআলিঙ্গন pic.twitter.com/TP8R9Cb4LB

Offending!! Who's to decide on who's to be beaten up? Who are they to decide? The ones beating up should be punished & penalized for their behavior. Hope.. Majority says so?

In the mood for love? In heartless India, don’t you dare
A couple beaten on the Kolkata Metro for standing too close is yet another instance of India’s intolerance for young love.https://t.co/sm0all8SEB via @scroll_in

A young couple embraced in Kolkata metro. It made a bunch of frustrated old losers angry. They beat them up. Scenes of hatred are allowed. Scenes of love are considered obscene. pic.twitter.com/Jv4zNaMDe8

Young couple thrashed for hugging in Kolkata metro and most of them who involved in violence were old men. They have no problem with rapes and child marriages but only with love. This is an inhuman cultural problem!

A group of older men beat up a couple in Kolkata Metro for hugging and being too close. Just everyday bhadralok anger at a hint of pleasure punctures myth of Kolkata as some liberal utopia that not even it's most deluded citizen believes

Soon after the news broke out and it got viral on social media, the youth of Kolkata decided to do something against the event. As reported by NDTV, young citizens from all over Kolkata gathered around Tollygunge Metro and offered free hugs to each other. Protesters came and said that their main agenda of holding a protest like this one was to show that hugging is an expression of showing love and it should not be considered an obscene act.

They offered free hugs and sang together to stand against the moral policers and their perception of what is wrong and what is right.

Concerned citizens at Tollygunge metro station spreading messages of peace&love aft a couple was beaten up by co-passengers a few days ago at Dum Dum metro station for hugging inside a metro train @CNNnews18 pic.twitter.com/TTdu4YjAxu

Part1: Protests outside Tollygunge Metro station today to protest against an alleged moral policing incident inside a train compartment pic.twitter.com/ZunMRxM4IC

This single incident shows the difference the old and young India has among them. They might be brought up in the same household and in the same city, but their mentality is different and so is their ways of handling a situation. What those old men did while beating the young couple, is what should have been an obscene act, the one which required moral policing, instead it was the result of one.

Let’s just hope that this one incident turns out to be an example to live by.