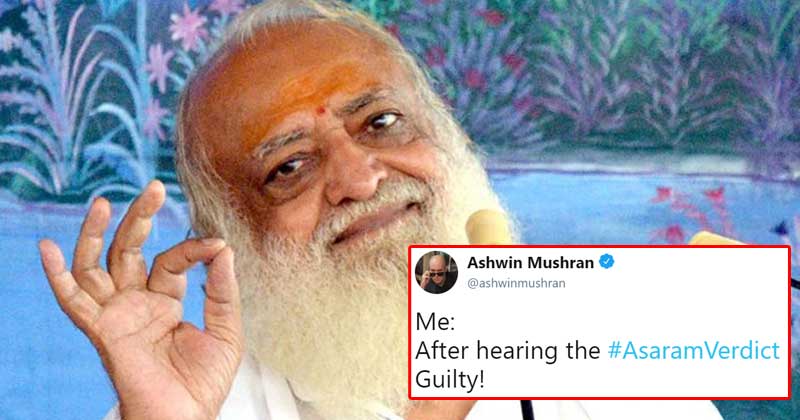 Another day, another godman found guilty of rape.

India is the land of gods and the same goes for apparent godmen who consider themselves the some of the biggest devotees of the god and the one who have the access to reach him. Millions of people in India currently follow atleast one of these hundreds of godmen and months after months, more and more of these godmen are getting convicted for their crimes.

The recent one being Asaram Bapu who has been in jail for almost four years now, ever since a case against him was registered in 2013 of raping a 16-year-old girl. While his existence has always been felt fishy for non-supporters, the Jodhpur case shed light on the brutality with which godmen like him function.

But on Wednesday, Special Judge Madhusudhan Sharma delivered the verdict in a makeshift court at the Jodhpur Central Jail, where Asaram Bapu has been lodged since 2013. And, as per the judgement, Asaram has been found guilty of rape.

Elaborate security arrangements were made with Section 144 being imposed in the city. The charge sheet had named Asaram and four others — Sanchita alias Shilpi, Sharad Chandra alias Sharat Chandra, Prakash and Shiva alias Sava Ram Hethvadiya. Asaram is charged under sections of the POCSO Act, Juvenile Justice Act, and IPC

Before the judgement was to be pronounced, security in Rajasthan, Gujarat, and Haryana was beefed up as directed by the Ministry of Home Affairs and additional forces were deployed in order to ensure that there was no violence. Something that usually happens whenever an influential man, especially a godman, is convicted of his crimes.

Asaram is not a small godman, but one with world-wide supporters and an extremely heavy and influential bank balance. In 2014, investigators estimated the value of this wealth at between Rs 9,000 crore and Rs 10,000 crore, “in the form of bank accounts and other investments including shares, debentures and government bonds.” This figure did not include the value of the land held by Asaram’s ashrams across several states, as reported by The Caravan.

So, Asaram is a child rapist. And he has been found guilty. Good.

But can people please stop sharing images of him with PM Modi. Patronising him before he was exposed to be a pervert is no crime.

Let’s be fair and give him the benefit of doubt that he, like us, did not know.

God needs to change his hiring policy or fire his H.R. department because the last few Godmen have really hurt his image.

Amassing wealth around Rs 10K crores, Asaram Bapu was the richest self styled guru in the world till 2013.For #AsaramVerdict today,Jodhpur turns into fortress with section 144 imposed. Violence in the name of a ‘saint’?#AsaramCaseVerdict #WednesdayWisdom pic.twitter.com/RPYBYkvYfR

From riches to rags…
From saint to sinner….
From AsaramBapu to HeyRam

#Asaram, the self-styled godman is now a court-pronounced rapist. #AsaramVerdict

He is just another rapist dressed like a saint.

His blind followers will still defend him. Wonder what makes people so blind!#Asaram #AsaramBapu #AsaramCaseVerdict

No more an accused, he is now the Child Rapist Asaram

Big Salute to the nine witnesses who dared to testify against him and were attacked. In last 4 yrs, Three witnesses had been murdered after they spoke against him. May they rest in peace ?#AsaramVerdict pic.twitter.com/ZbsB9lK1Zm

The case was registered by the family member of the victim who hailed from Uttar Pradesh in 2013. And, even though the judgement came a bit too late, it finally did, ending the years-long misery of the witnesses as well as, of the family that booked the charge against him.