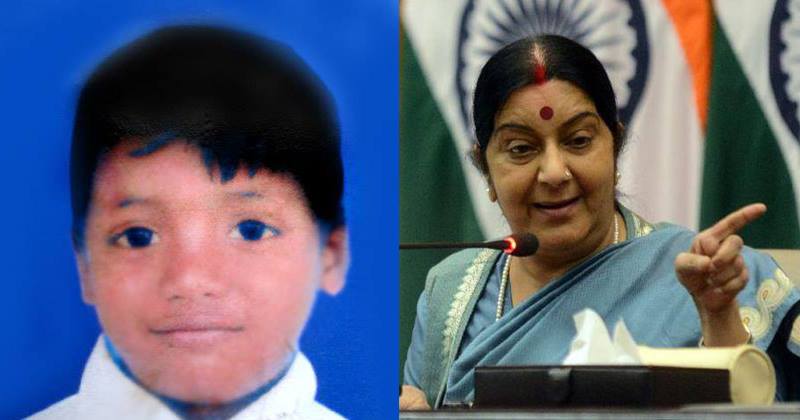 Sushma Swaraj is fulfilling her responsibility as an External Affairs Minister just a bit too well. Another achievement is added to her list as she announced the return of an Indian boy, who went missing six years ago.

The External Affairs Minister revealed that a boy who was kidnapped from Delhi six years ago is finally found and he will be brought back to Delhi. The name of the boy is Sonu who is 12-year-old now, he was traced in Bangladesh. Sonu is in the custody of Indian High Commission in Dhaka and will reach Delhi on 30th June.

Sonu was traced at Jessore in Bangladesh and after a few journalist brought the matter to the notice of Sushma Swaraj, she sent a senior official of  the Indian High Commission in Dhaka to Jessore to meet Sonu in May.

Sushma also said that they have matched the DNA of the boy with his mother and the result of the DNA test is positive. As soon as she broke the news on twitter, her tweet was flooded with the heartwarming responses of Twitteraties.

Sonu – who was kidnapped from Delhi was found in a shelter home in Bangladesh. We matched the DNA with his mother. The test is positive./1

Indian High Commission in Dhaka has obtained Sonu's custody. He will reach Delhi on 30th June. /2

I thank all those who looked after our young citizen in Bangladesh./3

@SushmaSwaraj it's all your efforts mam… we proud of you. ..

@SushmaSwaraj we proud to have minister like you. We are feeling safe and protected in abroad now because we know we have @SushmaSwaraj

@SushmaSwaraj : Madam, this is a stupendous effort tracing Sonu all the way to BDG. We all bow to you for all your effort.