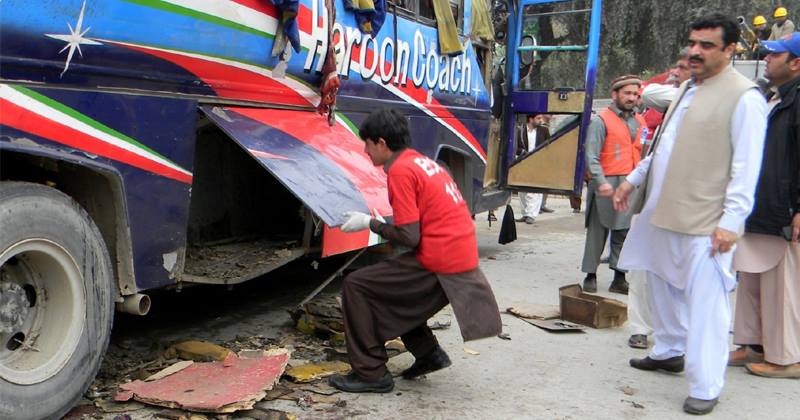 In a Bomb Blast, 15 people were killed and 25 others were injured in a bus in Pakistan’s Pakhtunkhwa province. On Wednesday morning the bomb blast occurred near Sunehri Masjid at Peshawar.

The area was sealed right after the blast and the injured people were transferred to the Lady Reading Hospital. A police officer said that an emergency has been declared at the hospital.

The bus was traveling from Mardan city to Peshawar carrying passengers. As per TV footage, the bus was severely damaged after the bomb blast and the injured people were trooping out of it.

The police officers stated that the bomb was planted in the rear portion of the vehicle.A high grade explosive measured the weight of eight kg was used for the explosion, claimed Disposal Unit personnel.

The Chief Minister of Khyber Pakhtunkhwa, Pervaiz Khattak censured the blast and directed for suitable medical care for all the people who were injured in it.

He also said that government employees were travelling in a private bus and the government cannot ensure the security of privately operated vehicles.

Pakistan’s Prime Minister Nawaz Sharif also condemned the blast, expressing grief over the loss of lives of the people.

Expressing grief over the loss of lives, Prime Minister Nawaz Sharif also strongly condemned the blast. Imran Khan who is the chief of Pakistan Tehreek-e-Insaf (PTI) also condemned the blast and asked the government to provide the best medical treatment to the injured people.

The blast comes a day after military of the Pakistan said that the army is about to conclude the military offensive in North Waziristan Shawal valley.

Though the 20-point National Action Plan has been implemented to combat terrorism but there have been several attacks since the beginning of the year in Pakistan.

The official reports of this 20-point National Action Plan claims that they ahve conducted thousands of intelligence-based operations and scores of militants have been arrested and eliminated since then.