Shocking Reality Of Navratri-Garba In Gujarat

Navratri is one of the most important festivals in the Hindu religion. The devotees worship the nine avatars of Godess Durga and keep fast during the nine days of festivity. It concludes on the tenth day with Dussehra or Vijayadashami, celebration of Lord Rama’s victory over Ravana.

The Lord Rama and his army invoke the powers of Goddess Durga by keeping fast and doing havans for complete nine days and nights to acquire the strength to kill the demon Ravana.

In Gujarat, the festival is celebrated with much fervor by playing Dandiya Raas and Garba. The men and women, dressed in traditional wear, dance on Gujarati songs in synchronized circles.

However, with passage of time, the face of Navratri has drastically changed for the bad. While corporate world has turned the festival into a marketing opportunity, the moral corruption has killed its essence and significance.

It would come as a shocker to many, but Navratri has eventually become an excuse for youngsters to get indulge into sexual activities. As per the reports and statistics of last many years, the sale of condoms and contraceptives increases by 20-30% in Gujarat during the period of Navratri. 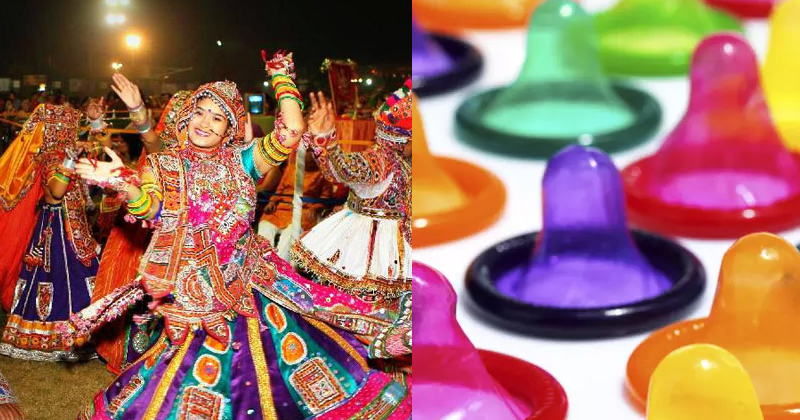 As per the doctors’ observation, the sexual activity touches its peak in the Navratri month. Female pregnancies and abortions are also an alarming trend in the city during the time.

“Pregnancies and abortions are rising, that has been the observation by doctors and gynecologists over the last few years,” Mukul Choksey, Surat-based sexologist, was quoted by a leading daily.

Sensing the business opportunity, the condom companies also come up with attractive offers to lure the customers in Navratri. Moreover, the women, in a break from traditional norms, are also seen buying branded contraceptives from the shops without any hesitation.

Though, the stark reality of the religious festival is not known to many. The traditional class will not even speak the words ‘Sex’ and Navratri in one sentence forget about accepting the startling amalgamation of the two.

One of the main reasons behind this trend is the huge amount of freedom that girls and boys enjoy during this ten days of festivities. Parents are quite liberal about the deadlines for their kids to return home and this leverage is often misused by the young blood.

Surveys prove that the youngsters desperately wait for this festival for the entire year, as it gives them a golden opportunity to break the moral barriers away from the preying eyes of their parents and guardians.

Interestingly, as condom sales rises during Navratri, the demand for private detectives also shoots up. Parents hire these detectives in order to keep an eye on what their children (sons & daughters) are doing during the Garba nights.

The NGOs also put up their stalls at the festival venues and hand out the condoms to the people coming there. It is seen as an effort to create awareness about HIV and promoting safe sex among the young boys & girls but in reality it only gives boost to the sexual practice.

Really? Is this we have come to? The Navratri festival which is dedicated to manifestations of Godess Durga has now become the synonym for entertainment, fun and sex?

Before it gets too late, some concrete efforts from the society are required to revive the lost essence of the pious festival and maintain its dignity.