Home India A Teacher Got Captured On Camera Getting Massaged By A Student In... 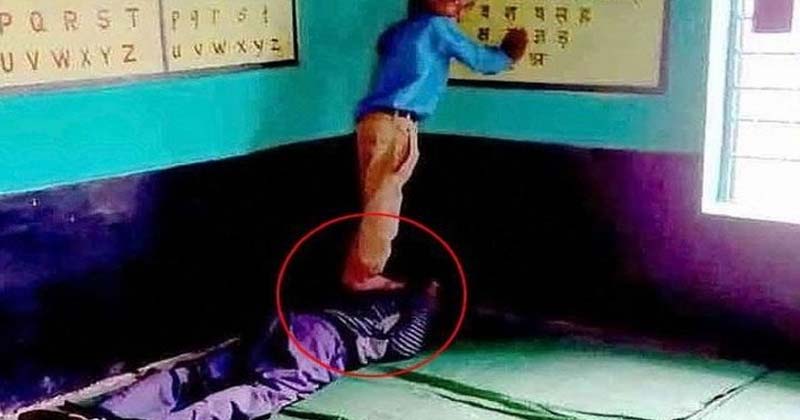 Looks like the feeling of power is taking over everything. In every profession, there are certain people who have the authority to make people do things but to exploit them or not is purely their choice. Teaching, however, is one of such profession that has considered as the purest. Remember Kabir said that a teacher is much greater than a god as he prepares us for the tough journey that life is? Looks like some teachers have forgotten that greatness comes with responsible actions not by exploiting their power over students.

A crazy incident has come to light that will make you wonder that if this world makes any sense or not. People now have become more aware and started to put the camera on their phone in good use. A teacher’s act, that is horribly wrong has been captured recently where he was getting a back massage by one of his students.

This incident happened in a government school in Damoh’s Madiyado in Madhya Pradesh. The teacher is lying on his chest and a student is giving him a back massage.

WATCH Madhya Pradesh: Teacher caught on camera getting a back massage from a student in a Govt school in Damoh’s Madiyado https://t.co/9Ghvo8poLC

The video is very clear, however, the authorities have stated that they need to validate the happening before initiating a probe.

We have asked our district education officer to submit a report on the incident, teacher will be suspended once we get the complete report: Deepak Joshi,School Education Minister #MadhyaPradesh

The video is enough proof to suspend the teacher but the authorities think otherwise. Looking deep into the situation won’t change the fact that it actually happens. Reports suggest that will be suspended, however, no one can be sure of it looking at the approach of the officials.

We have heard that in government schools, teachers knit sweaters or chop vegetables, getting a message is indeed something that we never heard of. This video is a much-needed wake-up call for Government, maybe it’s time to look after the teachers they are hiring. Such teacher cannot shape the future of the students.