The tournament every fan craves for is here. The series one so passionately awaits, and unfailingly so, year after year, is finally here. It’s a contest that apart from offering the die-hard cricket fan dollops of nerve-wracking entertainment has filled the palate of Indian cricket with countless talents over the years.

It’s a contest that has fostered immense cultural interaction among cricketers belonging to different nations and zones.

And it’s that time of the year again to embrace a series that’s birthed a new identity of T20 Cricket: the IPL 2021 is finally here!

If you were someone who was wondering when might the IPL 2021 be held and what would the fixtures be like, then the period of wait has come to an end.

It could be said that in the Indian Premier League in 2020 provided a much-needed relief in what was essentially a Pandemic-marred year.

In what became, once again, a championship-winning triumph of the Mumbai Indians, the most successful outfit in the annals of the Indian Premier League, the key question this time around is- who can stop the unstoppable force from Mumbai?

But up first, here’s information on the piece of context that’s vital to all fans.

The IPL governing council, on Sunday, announced the schedule and fixtures for the upcoming edition of the IPL 2021.

On that note, here’s much-needed information for those of us who may have thought that the famed T20 franchise league was due to begin somewhere around May.

The IPL 2021 shall be beginning from 9th April, 2021. And the venue of the maiden tie in the series, shall be the home of the much-loved Chennai Super Kings.

But here’s a catch: the famous MS Dhoni-led side won’t be featuring in the curtain-raiser of the 2021 IPL. It’ll be a high-octane clash between Mumbai Indians and the Royal Challengers Bangalore.

What’s further interesting is that the stadium that’s gone onto become to the largest in the world- the Narendra Modi Stadium, nestled in the upbeat Ahmedabad, shall for the first time host the playoffs of the widely-followed Indian Premier League.

Though, what’s changed this time around in IPL 2021 is that games shall be held solely in these following venues-

Delhi, Mumbai, Chennai, Bangalore, Ahmedabad, Kolkata- the six venues for this year’s IPL. Make no mistake- there won’t be any games whatsoever in venues in Rajasthan and Punjab.

Interestingly, of the 56 matches- the total number of games held in the IPL- Mumbai, Kolkata, Bangalore and Chennai shall be hosting 10 games each while Delhi and Ahmedabad shall be hosting 8 games.

Is there’s something else that’s a specific part of the IPL 2021? It must be duly noted that no particular team shall have the advantage of contesting on its own home venue; hence every contest shall be held at a neutral venue, a facet that’ll duly make the series evenly-fought in some respect.

In an elaborate report published on CricTracker- here’s what must be noted concerning the IPL 2021:

After hosting the tournament safely and successfully in the UAE last year with all safety protocols in place, the BCCI is confident of hosting the IPL at home with the health and safety of players and all people involved being paramount.

Furthermore, it’s important to note that each of the eight participating teams shall be required to travel on only three occasions during the league stage of the tournament.

All of that being said, kindly note the fixtures of the forthcoming mega T20 tournament- 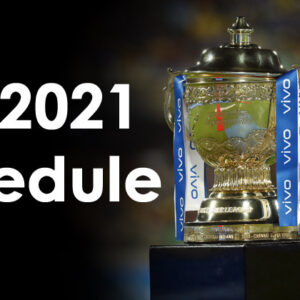