Ever since, Virat Kohli and Anushka Sharma got married earlier this month in Tuscany, Italy, they have been the centre of national news. There’s almost nothing as grand and as amaze-balls as this power couple tying the knot and that too, all in secret.

They had been dating for a long time now and ever since then, there’s not even a single news about the couple that was left-by by the media or their fans. From the first flying kiss for Anushka on the ground to their advertisements together, even the minutest things about the couple have been the focal point for everyone in this country. 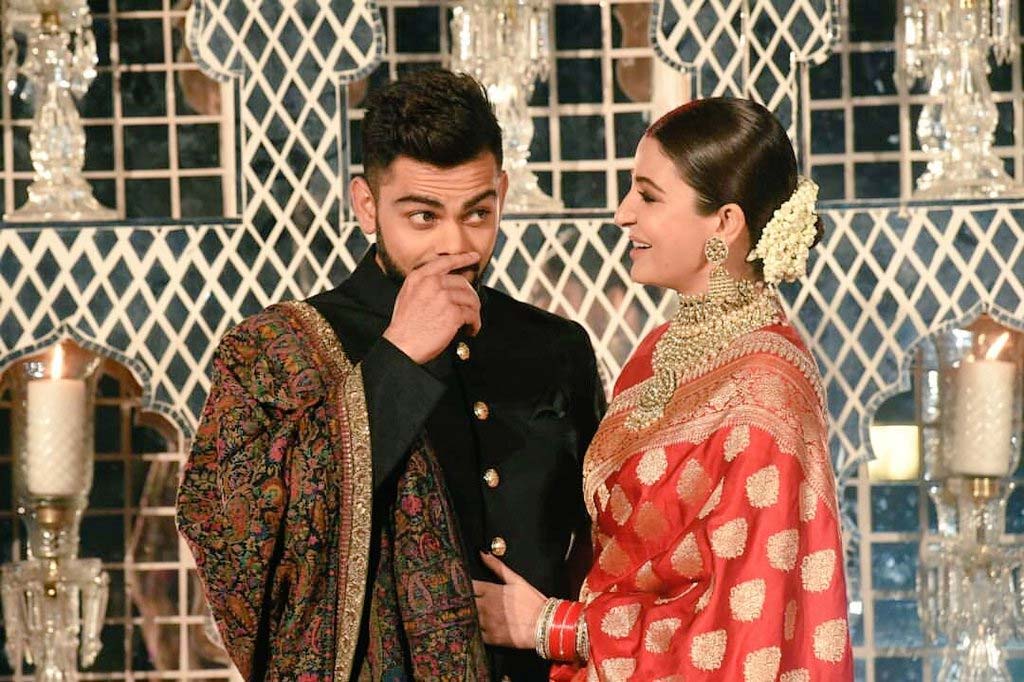 Now, after a whole lot of wedding celebrations and honeymoon, the couple is back in India for their receptions. While the first one took place yesterday in Delhi’s The Taj Palace Hotel, the other reception is scheduled in Mumbai for December 26th which is expected to be full of stars from the B-Town. 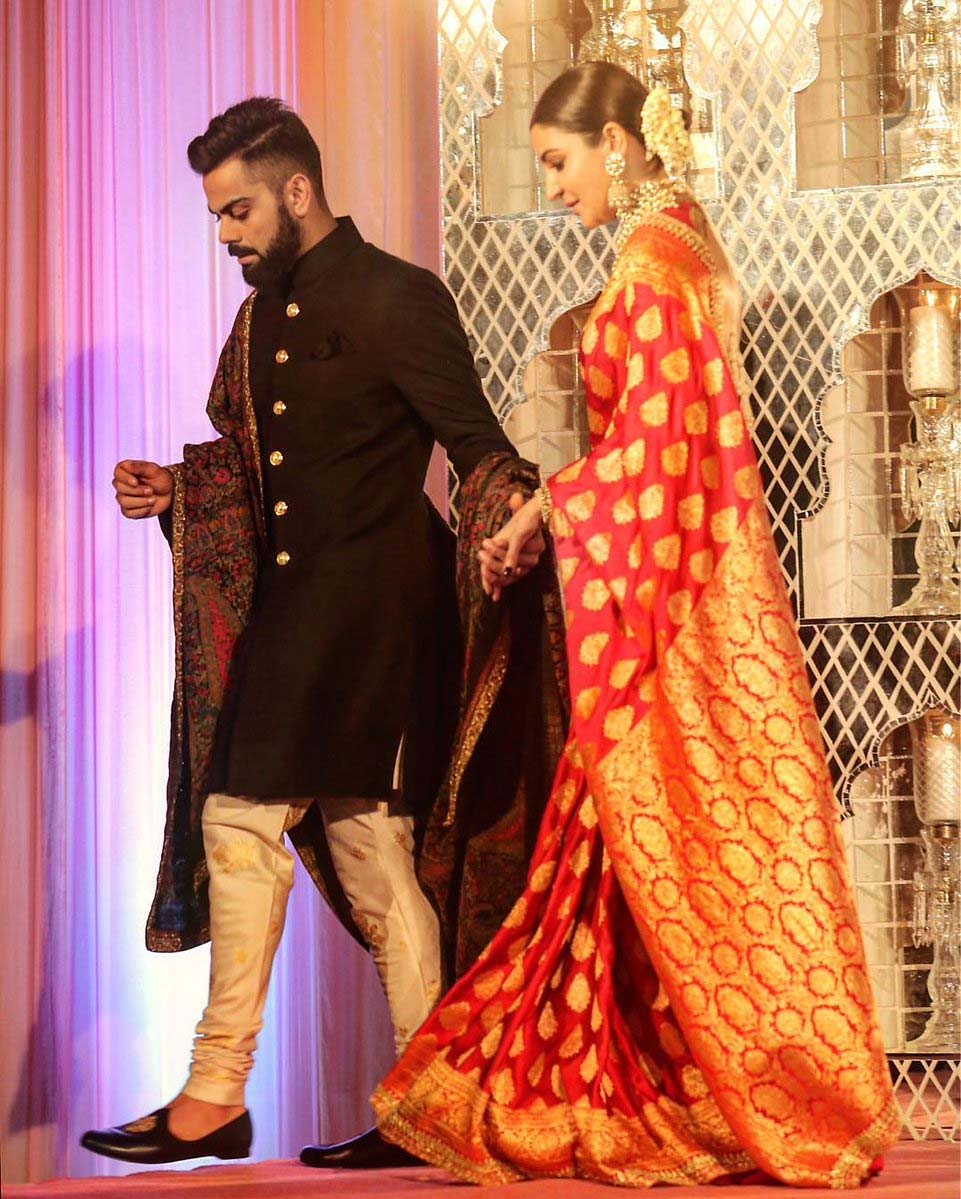 However, till then, there’s a lot that went down on the couple’s Delhi reception last night. From their amazing outfits to PM Narendra Modi’s presence at the event, everything was above anything ordinary. 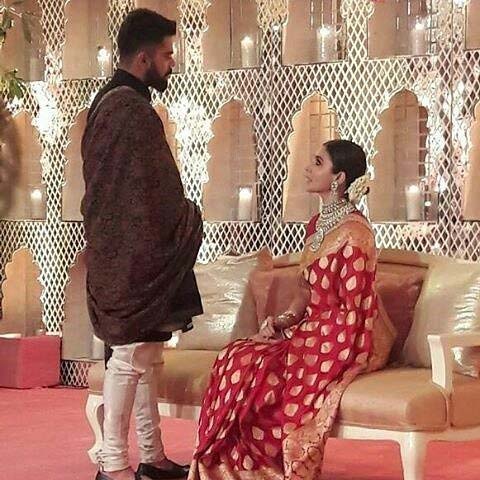 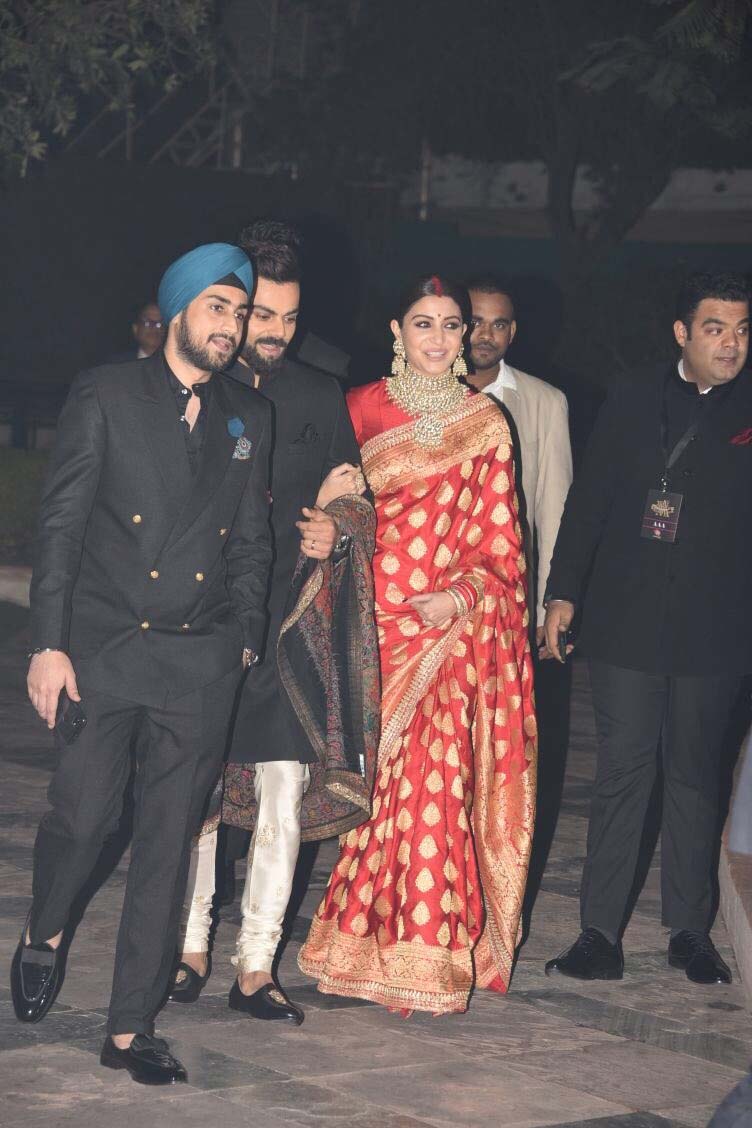 Virat Kohli and Anushka Sharma’s wedding outfit were in news for a long time, because of how amazing and beautiful they were. Both sported Sabyasachi for their D-Day as well as, for the celebrations before and after it. The same happened at Delhi reception too. 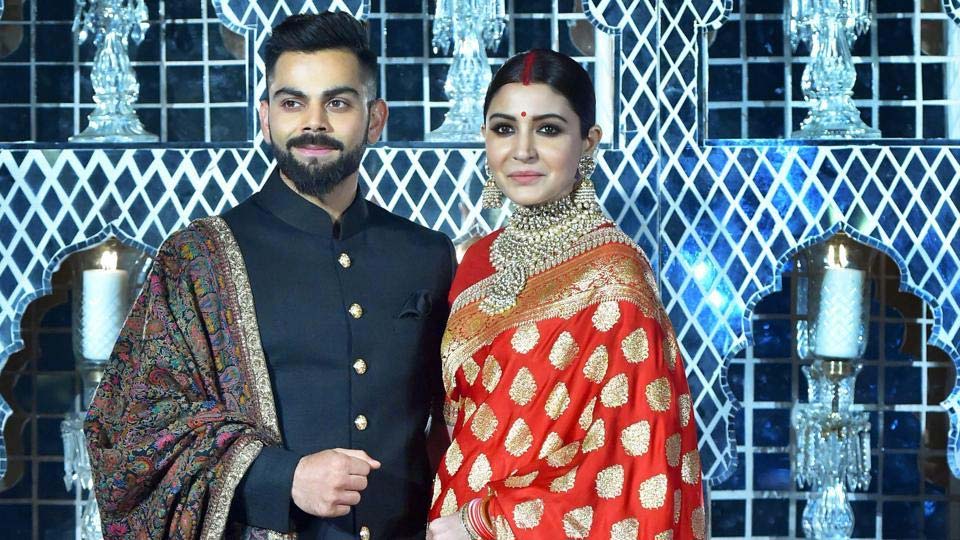 Anushka Sharma wore a red Benarasi Saree, Virat donned a black coloured silk kurta and hand embroidered pashmina shawl. Anushka Sharma’s jewellery too belonged to the Sabyasachi label, however, it was Virat Kohli’s pashmina shawl that stole the entire show. The pashmina shawl is one of the most precious pieces from Sabyasachi’s Kashmir collection and indeed looks beautiful. 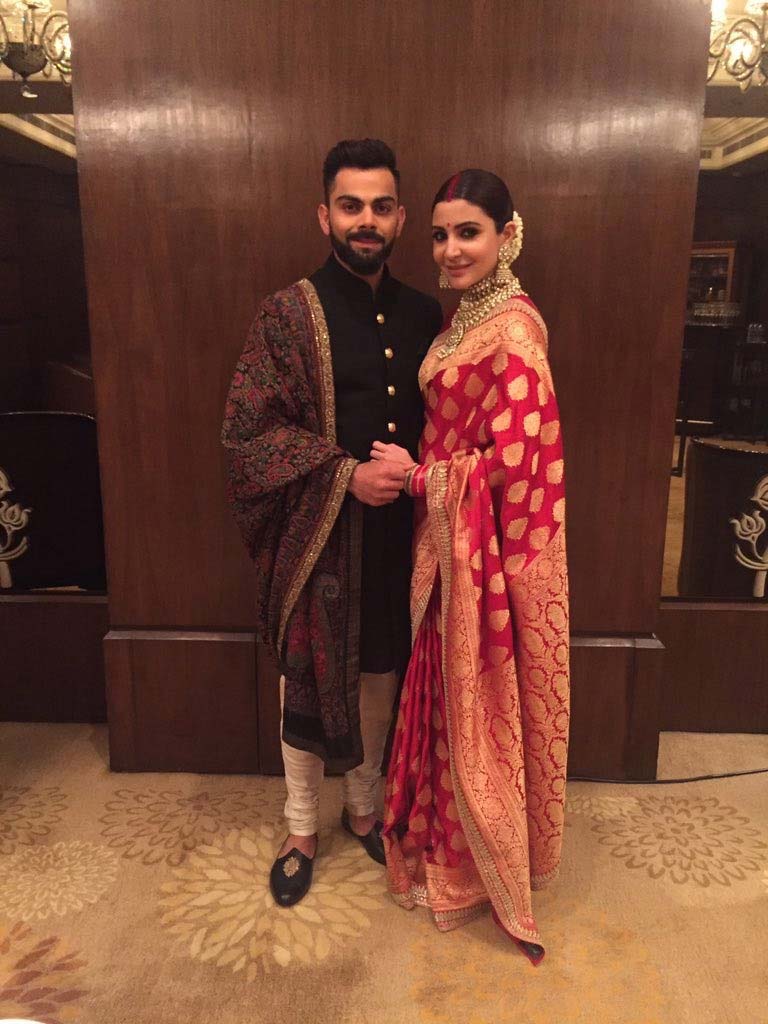 While friends and family members of the couple attended the reception in Delhi, the guest list also included some big names from the cricket and political fraternity. Yuvraj Singh, Sachin Tendulkar, Kapil Dev, Suresh Raina, BCCI President CK Khanna and Rajiv Shukla are some of the big names that graced the event. 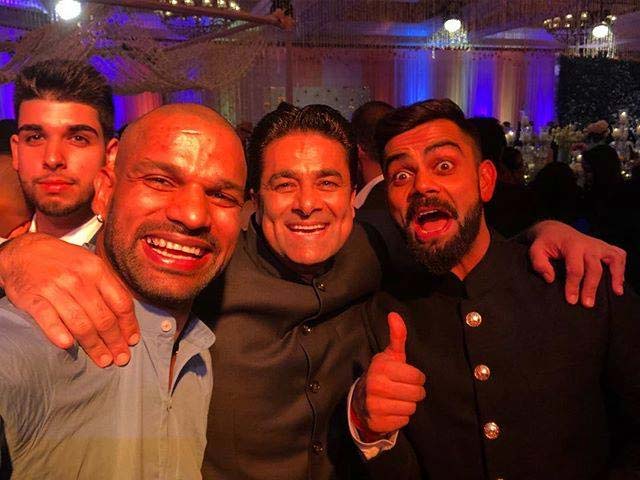 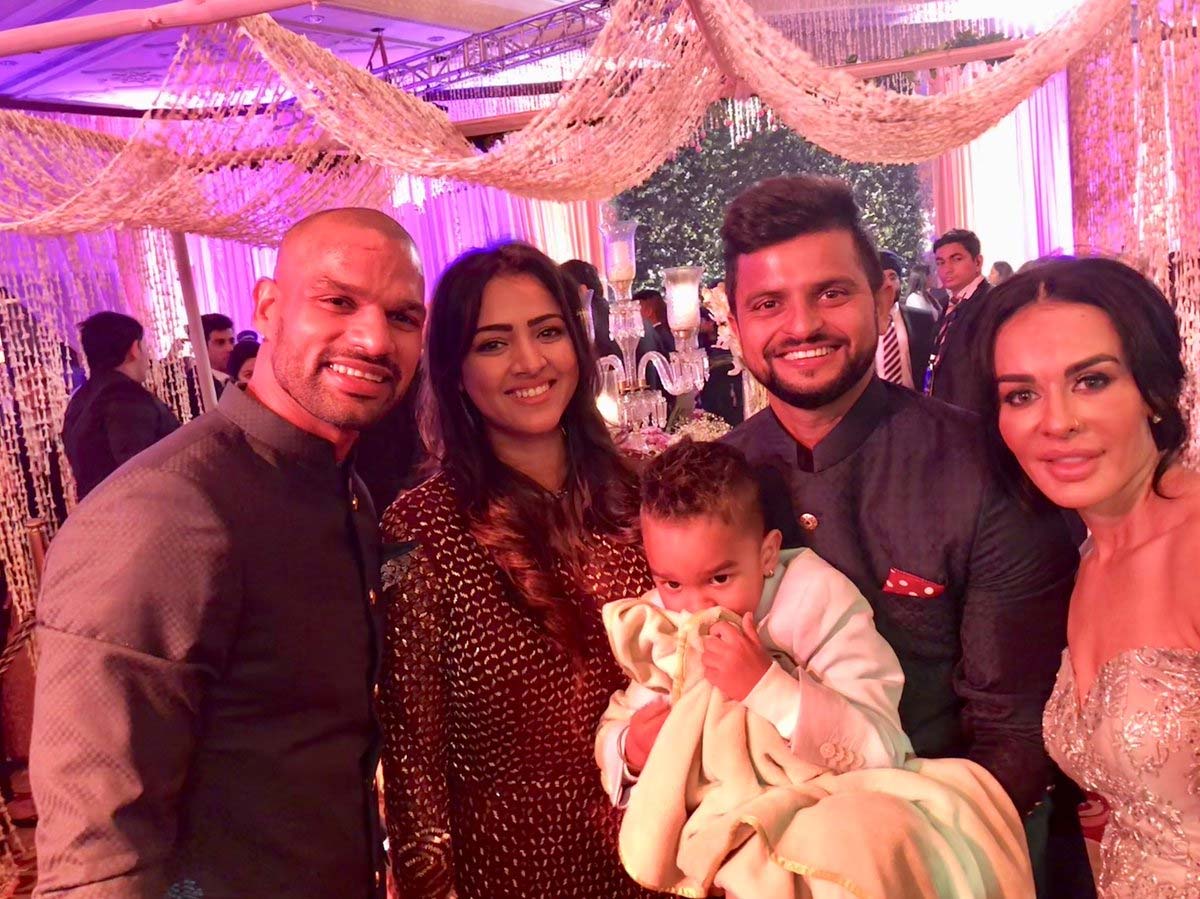 However, it was PM Narendra Modi that stole the spotlight by attending the event to bless the newly-weds. The couple personally invited Narendra Modi just a few days back. 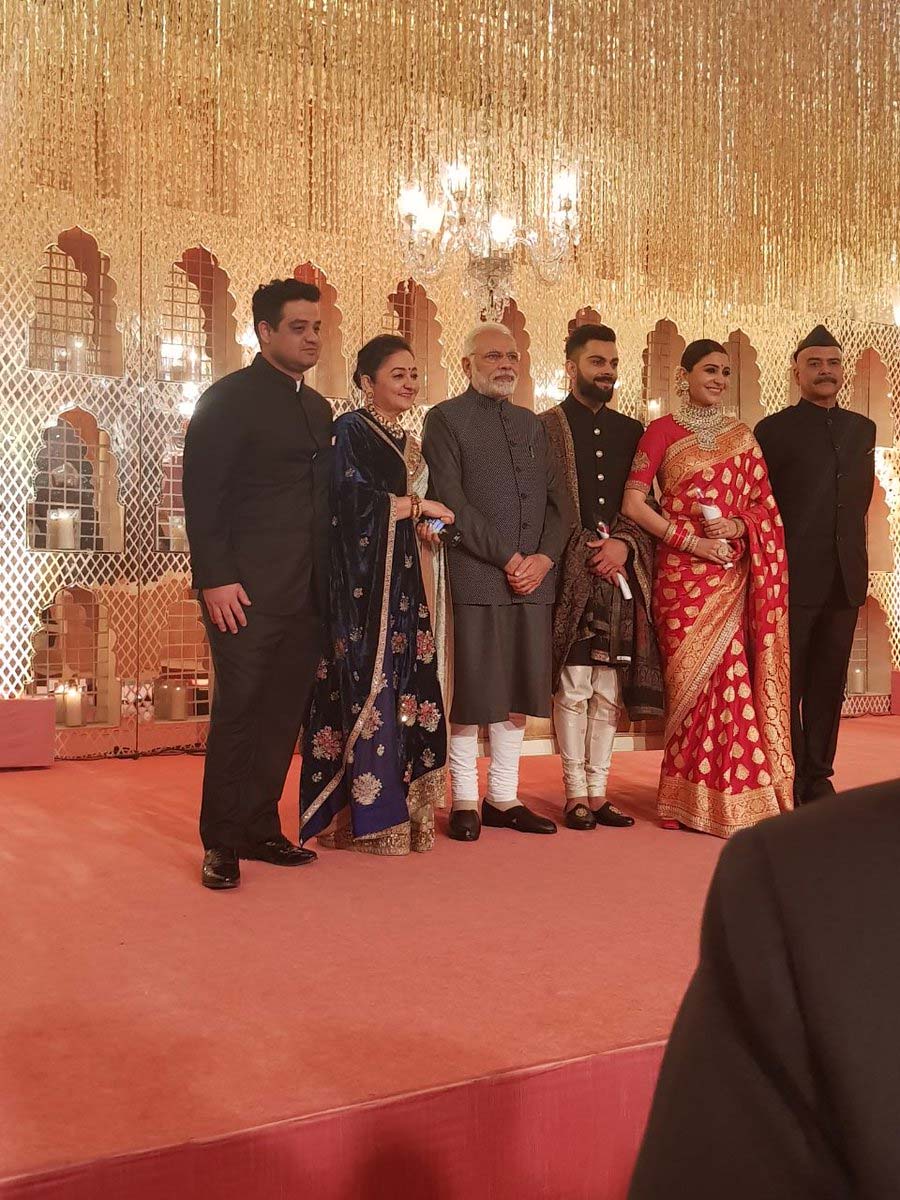 Punjabi legend Gurdas Maan performed at the wedding and the couple had a gala time dancing on his tunes. Check out all the fun videos from the event:

@AnushkaSharma has become a true Punjabi, look at those moves with @imVkohli! Finally #Virushka have made their first public appearance at their Delhi post-wedding reception! They’re goals at the moment. #VirushkaReception. https://t.co/lyG655LGni

With an end to the Delhi reception, we’re very excited about the Mumbai one because that’s where the who’s who of Bollywood would come to congratulate the couple. We’re sure, the turnout at Virat Kohli and Anushka Sharma reception in Mumbai is going to be much grand than any award show out there.

After the Mumbai reception, Virat Kohli, and Anushka Sharma, along with the Indian cricket team for their tour to South Africa on December 27 from Mumbai, only. Anushka Sharma will return in January to promote her film Pari which is scheduled to release on February 9, 2018.