Home Entertainment Twitter Is Having Too Much Fun On The Arrival Of Kaun Banega... 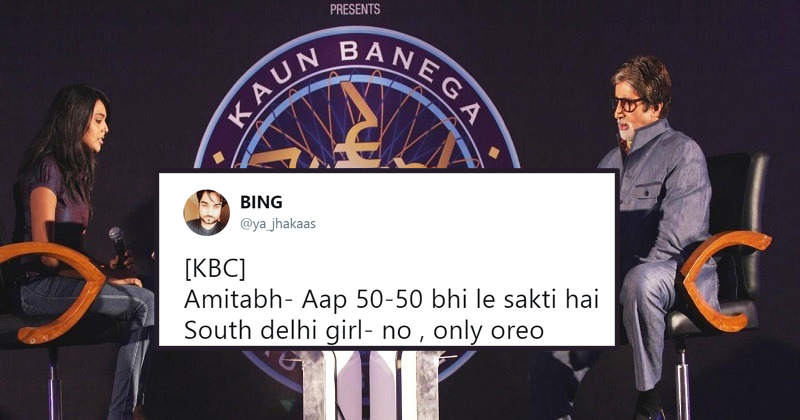 KBC is back and as excited as everyone was about it, they have not spared the opportunity to make some hilarious memes and jokes about it.


Amitabh Bachchan hosted Kaun Banega Crorepati has been a cult classic for many people in this country and as Bachchan is back with the 9th season of the show, people definitely were too excited about it. Amitabh Bachchan is back on the small screen with his KBC after three long years and even though the show premiered on 28th August, it’s just too nostalgic to miss out on.

Apart from Amitabh Bachchan, there’s so much more in KBC that makes KBC what it’s today. Be it the computer Ji, or the hook line, ‘lock Kar Diya Jaye’, everything about the show is extremely nostalgic for all those who used to hog onto the show and dreamt of participating in it, at least once in their lives.

After 17 years, when the show first aired, there have been made a lot of changes and the most exciting one if the change in the winning amount. Now, one gets the opportunity to win 7 whole crores as the prize money.

So, because of how great and classic KBC is, people on Twitter just can’t seem to stop themselves from getting a bit comedy out of it, and so they did what they’re extremely good at, meme-ing things up. Kaun Banega Crorepati is also getting the same service and welcome, and here some hilarious tweets, related to it.

KBC Introduced Video Calling In Phone A Friend So That The Friend Cant Google Search To Answer You….

The best part about #KBC is that it gives Amitabh Bachchan less time to tweet.

KBC* Amitabh: Tell us your sad story. Contestant: I pay my taxes honestly. Amitabh: Everyone does. Computer ji: Not everyone, Amitabh.

Tickled your funny bone, didn’t they?