Home Entertainment TV This Is What Bigg Boss Winners Are Doing Nowadays! 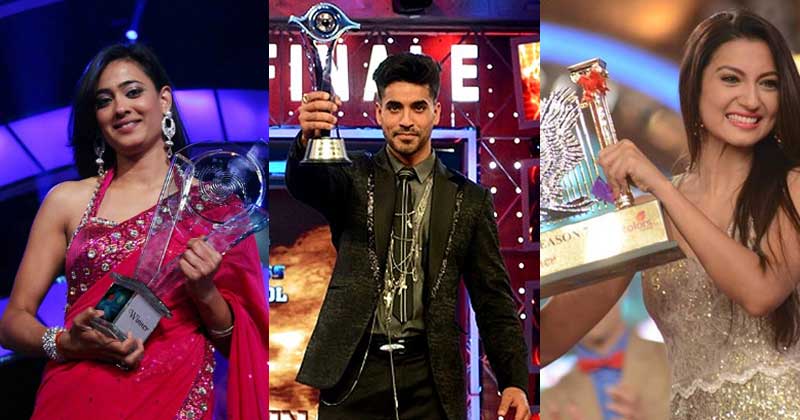 Bigg Boss – Well, in India it is one reality show that manages to keep millions of viewers hooked on the screen every day. From the primer to the finale, the fans of this TV reality show never miss even a single episode. No matter how filthy the drama in the house that’s covered with cameras gets, people watch it and judge all of its participants.

It’s kind of an addiction. The show follows the format of Big Brother (a reality show of the west), and till now it has successfully aired 11 seasons. From 2006 to 2018, there have been 11 winners of Bigg Boss but have you ever thought what are they up to? We mean after their big win, people may follow their social media handles but sooner or later the last winner is replaced by a new one every year.

We were just wondering about all the winners that Bigg Boss has given us and here is what we found about them.

In 2006 Rahul Roy became the first winner of Bigg Boss wasn’t an unknown name in the industry. The Bollywood star won the show by public voting. He has started his own production company by the name of Rahul Roy Productions which has produced its first movie “Elaan” in 2011 in Bihar. The movie starred Rahul and Rituparna Sen in lead characters. Rahul Roy has also joined politics and focusing on his political career.

The second season of Bigg Boss gave us Ashutosh Kaushik as a winner in 2008. He was also a winner of MTV Hero Honda Roadies 5.0 in 2007. After winning the show Kaushik appeared in MTV Roadies 8 and Bigg Boss season 6. He also tried his hand in Bollywood in movies such as “Zila Ghaziabad” and “Kismat Love Paisa Dilli”.

Vindu Dara Singh won the third season in 2009. He did not only won the cash money but also a Chevrolet Cruze. We don’t have much on him but we are sure that he is an avid follower of the show.

Popularly known for her character “Perna” in Kasautii Zindagii Kay, Shweta won the 4th season of Bigg Boss. After winning the show the actress appeared in Jhalak Dikhhla Jaa Season 6, Parvarish and “Begusarai. She was last seen on television in 2015.

Popular for playing a role as Kumkum in “Kumkum Ek Pyara Sa Bandhan”, Juhi won the fifth season of Bigg Boss. Currently, she is playing the role in Colors TV’s “Shani”.

The most popular vamp of Indian Television, Urvashi won Bigg Boss 6 in 2013. She is now playing an evil character of Queen Iravati in a TV series “Chandrakanta”.

Gauhar won the seventh season of Bigg Boss after which she dated a co-contestant Kushal Tandon for a short period of time. She appeared in a few music videos and item numbers. Gauhar is currently running her own digital channel.

The eighth season of Bigg Boss was won by “Diya Aur Baati Hum” fame Gautam Gulati. Who later hosted a TV show and acted in Rakesh Mehta’s short film entitled “Darpok”. The movie gained popularity for being presented at the 67th Cannes Film Festival. He was last seen in “Behen Hogi Teri” as Rahul. He is still trying his luck in Bollywood.

Prince Narula won the 9th season of Bigg Boss. He later played several roles in few tv shows. He is now a gang leader in Roadies Rising. He also got engaged to his Bigg Boss co-contestant Yuvika Chaudhary on 23 January 2018.

Popularised as a commoner, Manveer won the 10th season of Bigg Boss in 2017. He was later seen in Khatron Ke Khiladi as a contestant.

She is the recent winner of Bigg Boss. Popularly known for her Angoori Bhabhi character, the actress is so far busy in partying owing to the fact that she spent 3 months in the house without a social life.

Hmmm! Were you expecting more? Do let us know in the comment box.