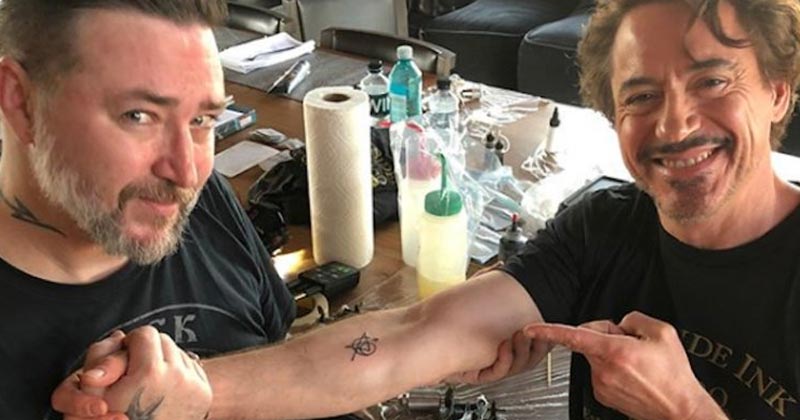 Avengers Infinity War will probably be considered one of the biggest movies of all time, the one that took dozens of movies and characters to come to life. Makers of Infinity War have described the movie as the biggest crossover ever, and while a lot of people made fun of it, the movie indeed is one giant roller coaster ride with all the characters and superheroes you’ve practically seen, all throughout the last 10 years of your life.

As big and interesting of a journey it was for the viewers, there’s almost nothing that can describe the stature of this journey for the actors and makers involved in this project. Certain actors were in it from the starting while others joined the universe much later, but they are all bound with one love for the Marvel Cinematic Universe.

Since the release of one of the biggest Avengers project on April 27, the entire team involved in the project is having a great time. And, while the concluding big movie is in its post-production, gearing up to release in May next year, five out of the six original Avengers – Robert Downey Jr (Iron Man), Chris Hemsworth (Thor), Scarlett Johansson (Black Widow), Chris Evans (Captain America) and Jeremy Renner (Hawkeye) have got matching tattoos of the superhero team’s logo as a mark of memory and to celebrate the latest blockbuster.

Robert Downey Jr. took to Instagram to announce that the stars of ‘The Avengers’ have gotten matching tattoos to commemorate their 10-year journey together. Downey told EW that, “Five of the original six Avengers got a tattoo. And the sixth was the tattoo artist, who gave it to five of us, the one who opted out is Mark Ruffalo. It was (Scarlett) Johansson’s idea, and she and (Chris) Evans did it in New York. Then, their New York guy, Josh Lord, who is amazing, flew out to LA, he did me, did (Jeremy) Renner, and then we just bullied (Chris) Hemsworth into doing it, and he got it.”

The tattoo this gang got was not just some random tattoo for the sake of it. The “A” in the tattoo resembles the Avengers logo, while the “6” signifies the original six members of the gang.

Here’s all that the gang posted about their tattoo journey and how much they loved going through something like this.

Well team, we did it…? Thank you @joshualord for sharing ink with us all @avengers much love #eastsideink #bondedforlife @robertdowneyjr @chrishemsworth #chrisevans #scarjo #loveUall

This is absolutely my Favorite tattoo I’ve had the honor of receiving!!!! Each line done by a different original Avenger! With respect to @callmecorvine @cheopark and @jessmachete who’s tattoos I also love. Still riding high on this Marvel high. Thank you all for being patient with me during this brief beautiful moment in time. When I was young often comics and books where my only friends. 😢 like many of you (old enough) I grew up reading the Avengers. Please imagine how special this was for me. @robertdowneyjr @renner4real @chrishemsworth #scarlettjohansson #chrisevans special credit to the unsung Avenger @jimmy_rich plus background help from @callmecorvine and @colinjost thank you all so much. Plus, although I love tribute tattoos, I will never again do their original avengers tattoo. But I will happily duplicate their tattoo on me to anyone who wants it!😉 also, east side ink unicorns of death limited issue t-shirts available at @eastsideinktattoo now!! (As worn by all the OG avengers (mostly) @marvel @avengers #unicornsofdeath #ironman #hawkeye #blackwidow #thor #captainamerica #tracer @4tus and #gunsnroses there in hat form.

Sorry!!! Bad posting! I cut Chris Evan’s handsome face off in the last post. His outrageous mustache is for his Broadway play “Lobby Hero” I highly recommend it!! So here it is again to show how happy he was. Also, he did a pretty darn good job! Maybe we can convince him to do a guest spot? #chrisevans #captainamerica at @eastsideinktattoo with #scarlettjohansson and #Freya the dire wolf. #gunsnroses @4tus

The entire thing is just too special to be put into mere words, for both the people involved in it and the fans who have grown up watching the movies and absolutely adoring them to bits.