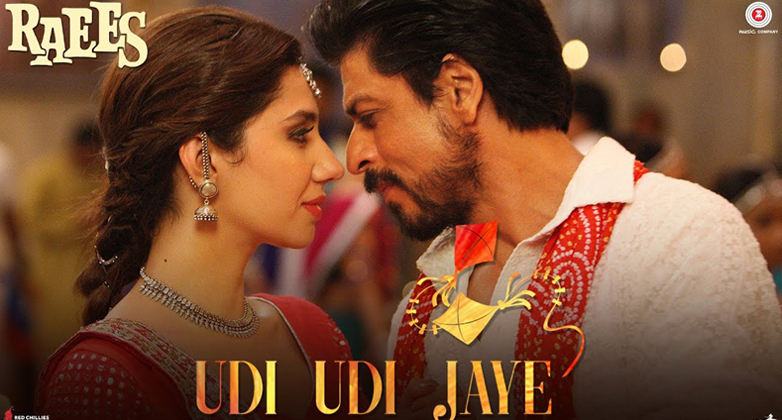 “Udi Udi Jaye” will dissolve a sense of happiness in your mood as soon as you watch this song. The latest released song from upcoming bootlegger movie ‘Raees’ is a ‘Happy go lucky’ song perfectly blended with romance, vibrant colors and festive gaiety. The song features Shah Rukh Khan and Mahira Khan as a ‘flying high in love’ couple and it is tinted with a little colour of sensuality. “Udi Udi Jaye” will make your heart admit that you don’t only fall in love but you fly as well.

The song has all kinds of delights of Makarsankranti festival and the best part is that the makers have released it just a few days before the arrival of Makarsankranti. The show stopper parts of “Udi Udi Jaye” are Kite flying sessions and Garba dancing, though we don’t see Shah Rukh and Mahira flying kites but we do see them doing Garba steps. From the beginning of the song we see Shah Rukh wooing Mahira with his beyond perfect tactics of romance and in the end it results in their marriage which makes this song a perfect love story.

When they exchange their marriage vows and Shah Rukh puts that mirror to see his wife after getting married, this one scene defines that they have an impeccable chemistry and we won’t be getting disappointed after watching these two romancing together onscreen for the first time. ( Well, no can resist the charms of Shah Rukh!).

The song is crooned in energetic voices of Sukhwinder Singh, Bhoomi Trivedi & Karsan Sagathia and the music id composed by renown Ram Sampath. The lyrics of the “Udi Udi Jaye” is written by Javed Akhtar. ‘Raees’ is directed by Rahul Dholakia and is opening in theaters on 25 January 2017.