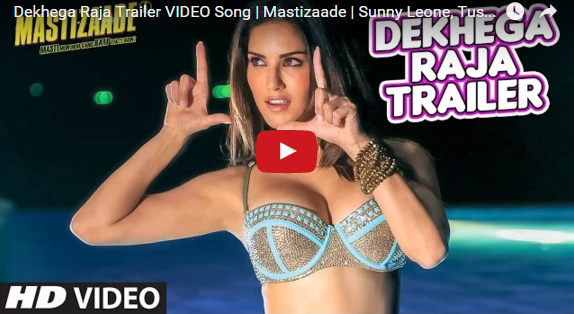 “Mastizaade” is constantly in the news for its corny content. The movie launched its new song “Dekhega Raja Trailer” and Sunny Leone is raising the heartbeats in her two different bikini “avatars”. She is romancing Vir Das and Tusshar Kapoor in the song and like all the previous released songs, Sunny is turning the heat up.

The song has ample of double meaning words but who would concentrate on the lyrics where wet Sunny Leone is grooving to the song. With her sexy expressions and sensuous dance moves, Sunny completely stole the show from Vir das and Tusshar Kapoor. With that curvy bod moving on the music we bet you will forget to keep anything else in mind. As the lyrics states “Dekhega Raja Trailer Ya Picture Dikha Du” you will be watching only Sunny Leone.

Not that it matters more than Sunny’s dripping hot moves but the song is penned by Anand Raj Anand and sung by Nakash Aziz & hot Neha Kakkar. The music is also composed by Anand Raj Anand. “Mastizaade” is an upcoming sex-flick directed by Milap Milan Zaveri and the movie is slated to release on 29 January 2016.