Home Entertainment With Sanju Teaser Here Comes A Diaspora Of Memes On The Film’s... 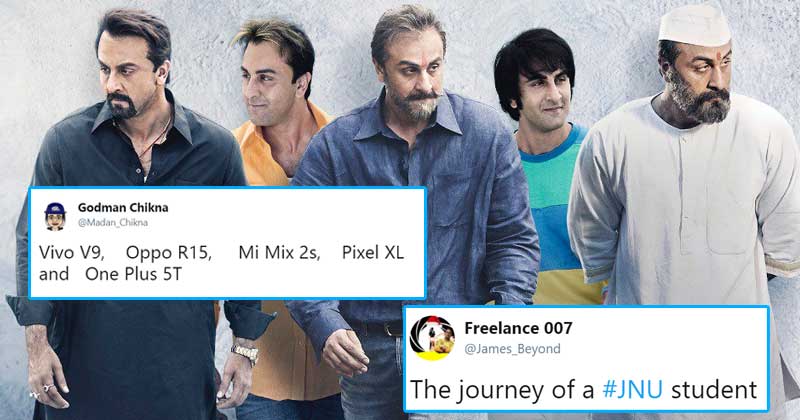 Plus, the movie in itself is more than just a biopic, it’s about a person who has changed so much over the course of time that his life almost seems like a movie in itself, and it’s actually great that someone is officially making one on it now.

While some loved the teaser, other’s had their doubt about it, but there’s one thing for sure about Sanju, and that is, everyone in the country is excited about its release.

Some from the excited lot decided to have their own little fun with the poster of the movie which stars Ranbir Kapoor in various different looks from Sanjay Dutt’s life, over the course of his life. We have the early days Sanjay, then the Munnabhai one, the one in jail and then the one out of it, each and every look is crucial to the movie and to his overall life too. And, people are adding some really hilarious one-liners to the poster which changes the entire context of the poster and that is just downright entertaining.

Check out some of the most hilarious ones over here:

all my personalities out together to collectively make a bad decision pic.twitter.com/qKZj4tPtFm

Me making different accounts to get one month free trial. pic.twitter.com/aHDNLdH1Ri

The journey of a #JNU student pic.twitter.com/1kJrpPdmhB

Making different profiles to stalk your ex after she blocks you. pic.twitter.com/asU4NhLRVe

We've all been #Sanju at some point of our lives. pic.twitter.com/4O58uIKxEb

Ranbir Kapoor giving you ideas for your kid's next fancy dress competition pic.twitter.com/sgn81pYaWZ

Oh, Internet! We just love you and you’re wacky creativity.