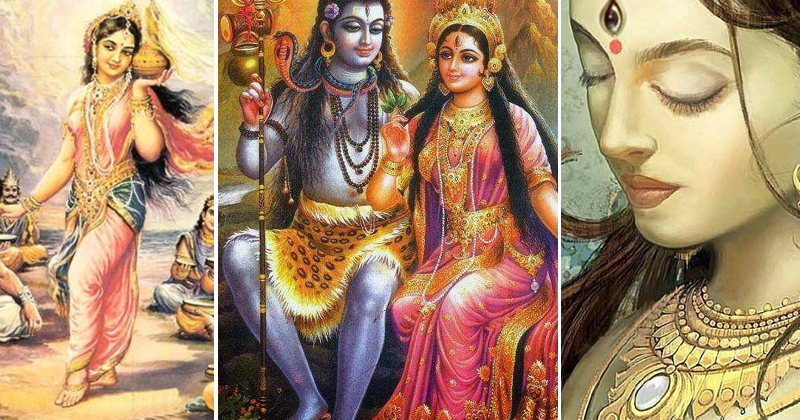 Lord Shiva, his wife Goddess Parvati and his three sons : Kartikeya, Ganesha and Ayyappa, the world knows all about them (Well little less about Ayyappa), but do you know about daughters of Lord Shiva?

Yes! The deity apparently had three daughters who are not as popular as his 3 sons but are still worshipped in some parts of India. These daughters have been mentioned in Shiva Purana and even many religious scriptures, stories mention their existence.

Going by the names of Ashokasundari, Jyoti and Vasuki or Manasa, they never had the popularity as their father, mother and siblings but they have been worshipped in some parts of India religiously.

Parvati named her Ashokasundari because she let Parvati get rid of her sorrow ‘Shok’ and she was extremely beautiful ‘Sundari‘.

She is worshipped mainly in Gujarat and not much has been known about her except the famous story that she was present at the time when Shiva beheaded Ganesha. The story says that at that time she hid behind a sack of salt in fear.

From then Ashokasundari has been associated with salt which symbolises the eternal taste of life and without which the life is unsavoury.

The second daughter of Lord Shiva is Jyoti. Her name literally means light and she is popular as the  Hindu goddess of light. There are two different myths about her birth.

The first myth suggests that Lord Shiva daughter Jyoti emerged from the halo of her father and she is a physical manifestation of Shiva’s grace but the second myth says that she has taken birth from a spark that emerges from the forehead of Goddess Parvati.

Jyoti is also known as Goddess Jwalamukhi and worshipped in many temples in Tamil Nadu. She is also worshipped as the goddess Rayaki who is associated with the Vedic Raka in  some parts of India.

3. The Story of Manasa

Manasa’s story is intriguing of them all. She was born when Shiva’s semen touched a statue carved by the mother of snakes, Kadru. Manasa is indeed Shiva’s daughter but she is not Goddess Parvati’s child.

Manasa Devi is the goddess who cure snake bites.

The mythological stories suggest that Manasa has a bad temper because she faced rejection from her father, her husband and her step-mother Parvati. She also hates Goddess Parvati for never accepting her as a daughter.

Her cult is widespread in Bengal and she is widely worshipped in the rainy season because at that time snakes become more active.

She is also worshipped for protection from snake bites and infectious diseases like smallpox and chickenpox.

Where these three don’t have much mention in our religious stories and sculptures , there are enough evidence that all three of them are apparently real.

Here Is Why and How Is Vaisakhi Celebrated In India

India’s ‘9 Unknown Men’ Of Ashoka: The Secret That Remains Hidden Even In Today’s Time!!

These ‘Upadeshas’ From ‘Bhagavad Gita’ Will Lead You to Achieve Everything You Want in Life!!

On Krishna Janmashtami, These 11 Important Lessons Will Help You Conquer The Toughest Challenges In Life.

Did You Know First Rakhi Was Tied By a Wife to Her Husband? Here is Full Story of Raksha Bandhan

Ravana Was More Than Just A Villain: 11 Facts About Ravana You Should Know