The power of cinema lies in the eyes of the viewer and even the success or failure of one piece differs from person to person. While some might love a movie, others could possibly hate it and vice-versa. And this makes the movie watching process even more interesting and worth it than what it already is.

This particular phenomenon stands exceptionally true for Salman Khan movies that went on to make crores and crores of movies, while other ones bite the dust. Each and every release by Salman Khan opens to a massive audience that spends a ton of cash to see him on the big screen and enjoy every second of it.

So when a new Salman Khan’s movie trailer drops, the audience is bound to choose their sides and do the best they can do to make their point to the world. Yesterday, Race 3 trailer was dropped by the makers and it got out the funny side of Twitterati out in public. As soon as the trailer was made available for the viewers it got the people talking and here are the best of those responses and tweets.

Just saw #Race3Trailer can safely say this is the worst piece of trash I have seen from Bollywood and the sad news is this will break box office records. Says a lot about us as audience.

"our business is our business. none of your business," is gonna be my standard response to any intrusive question I face from anyone in life. #Race3Trailer

#Race3Trailer is the longest ThumbsUp ad.

The funniest moment in the film #Race3Trailer👇It looks like sequel of Flying Jatt here! pic.twitter.com/JeCZKuXlO8

Race3 is not a film,it’s a quiz where audience will keep guessing in theatre ,which of the actor is more worse . #Race3Trailer

Big sly on what Gandhi Family has done to our country via #Race3Trailer 👏 pic.twitter.com/ZveKyysJny

Good to see someone from bollywood coming ahead and saying this to him. More power to you girl. pic.twitter.com/19M3evQ4yD

In case you haven’t seen the Race 3 trailer yet, here you go.

Race 3 has got an ensemble including Salman Khan, Anil Kapoor, Jacqueline Fernandes, Bobby Deol, Saqib Saleem and Daisy Shah. The movie is directed by Remo D’Souza and is the third movie in the Race franchise. The film is scheduled to release on June 15, 2018. 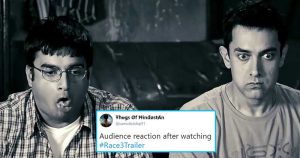