These Are The Most Binge-Watched Shows And Movies On Netflix

Netflix, one of the biggest and successful streaming services in the world made its India debut, some two years ago. The initiation of Netflix in the country brought a range of world-entertainment-loving generation residing in India together with the world. Netflix offered us the opportunity to watch the same shows and movies, at the same time and day, it was released for the audience in the world, something we have never experienced before.

Soon, Netflix became the most beloved video streaming service in the country, while opening doors of exploration for various other ventures too.

However, Netflix is more than just that. Nearly six years ago when Netflix got into original programming, the company made a decision to put all of its episodes on the service at once, resulting in the phenomenon of binge viewing. What first felt like a disaster in programming and marketing strategy soon made its mark on the world.

Binge watching phenomenon gave birth to the binge racing – which constitutes of people who strive to be the first to finish by speeding through an entire season within 24-hours of a show’s release. While this anomaly can easily be pushed around for making an entire generation grow up on not-knowing-what-waiting-feels-like feeling, it’s also serving to the current on-the-go strategy the world wants everyone to be completely cool with.

However, that’s a discussion for some other day, today, we’ll be discussing the data compiled by Netflix between January 2016 and December 2017. As per the data collected, Indians are more excited about racing through a TV show as soon as it drops than the rest of the world – three days versus the global average of four days. More than one-third (34%) of Netflix viewing hours in India is through connected TVs, which includes people using smart TVs or game consoles. Subscribers in India take an average of five days from joining Netflix to start their first binge. For users in India, downloading has been a much more popular feature than it is in the US or Europe. 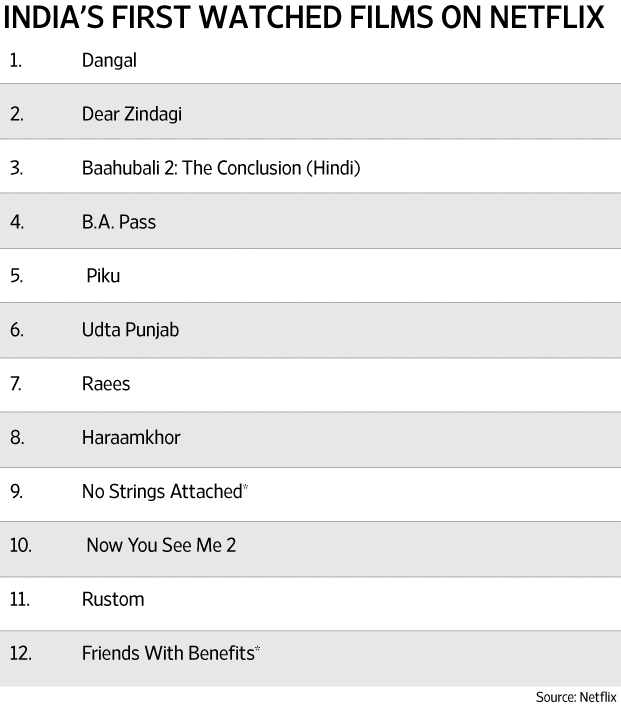 Dangal tops the list of films first watched by subscribers in India. Dangal was a sports biopic based on the real-life story of Mahavir Singh Phogat who trained his daughters in wrestling for Olympic and Commonwealth Games.

Following Aamir Khan’s Dangal was Gauri Shinde’s Dear Zindagi with Alia Bhatt in the lead role. This 2016 release is considered to be one of the movies in Bollywood on mental health issues and it also has Shah Rukh Khan in a pivotal role in it. The third movie on the list was S.S. Rajamouli’s war epic Baahubali 2 which is also the highest-grossing Indian film ever.

Now, this is certainly an interesting list for all the Indian Netflix subscribers. Narcos, a Netflix original about Columbian drug lord Pablo Escobar, tops the list of shows first binge-watched by Indian subscribers. Following Narcos is Stranger Things and House Of Cards. Interestingly, both the shows are Netflix originals and have gained a strong fan base.

Out of the list of these 10 shows, 5 are Netflix’s originals, while the other 5 are either old shows from the network TV or the on-going ones from the cable network in America.