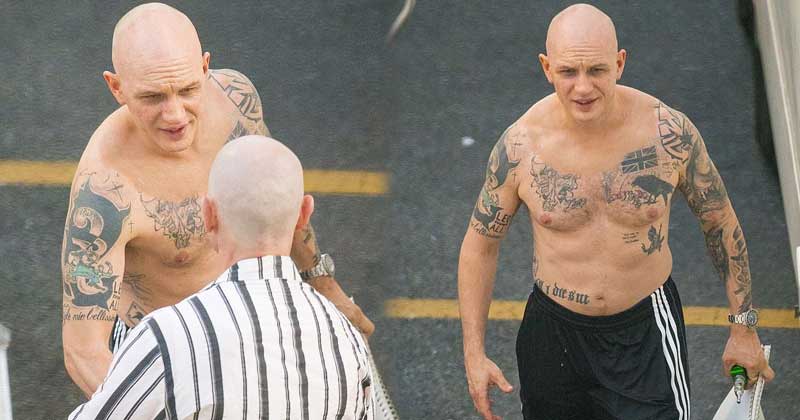 “You can go a long way with a smile. You can go a lot farther with a smile and a gun”, exclaimed Al Capone once upon a time. But that way back in the past. If you were to look at Tom Hardy- Hollywood’s brightest export from England in the last decade- shooting for a flick as Al Capone, you’d rather go without a smile.

And chances are, even if one were to put a gun on your head and force you to put up a grin, you might fail to do so. So utterly scary and unrecognisable does Tom Hardy look having gone completely bald as Al Capone that even a mere look at the Briton may make you fret.

But truth be told, there are few actors around who go so solidly in their search for perfection in a movie as Tom Hardy, who was clicked by a number of Paparazzis as the English actor was located shooting in the US. The new flick- directed by Josh Trank- who’s previously been associated with Fantastic Four- follows the life of the dreaded American mobster in his 40s, when he’d developed the medical condition of Dementia.

Often seen smoking a cigar and armed with a whirl-winding collection of hats and guns, Al Capone rose to the deep echelons of thuggery and crime syndicates in the 1910s and 1920s. The ‘Dark Knight Rises’ star is all set to don the hat of one of the most feared criminal-gangster’ in the history of the United States and his physical transformation is implicit to donning such a challenging part.

Seen absolutely bald and sporting many a tattoo, Tom Hardy seemed distinctly unrecognisable and while the usual buffed up frame wasn’t to be sighted, the actor looked rather lean and mean. Although his transition isn’t as drastic as some of his other muscular avatars on the big screen, Tom Hardy is expected to essay a moving and intense part portraying Al Capone. The ‘Warrior’ actor in midst of a day-long schedule was seen interacting with a body double who he was quite surprised to have bumped into, following the duo’s similar appearance. Sporting nothing but dark black shorts and green shoes, it was Tom Hardy’s totally bald look that grabbed the most attention from everyone.

Apparently, the Al Capone movie is titled ‘Fonzo’ and one is yet to know the exact plot of the story as much of the current development is under the wraps. But that told, what can be expected is that since it has an actor of the calibre of Tom Hardy, it may just be an intoxicating piece of cinema that will delve into a period of history that was submerged in crime and a great travesty.