Irrfan Khan’s significance in the world of movies belongs to a stature that the entire world appraises. He has been in the movies for a long time and continues to give some of the memorable and moving performances in his movies. Which is why he has not only found success in Bollywood but also in its American counterpart. Hollywood absolutely adores Irrfan for one of the most important things and that is his acting. He has done some brilliant Hollywood movies with important roles and his streak continues with Puzzle.

Sony Pictures Classics released the first Puzzle trailer and it looks interesting. The premise of the movie revolves around Agnes’ (Kelly McDonald) monotonous life where she doesn’t know what to do with her life other than taking care of her family. However, there’s one thing that calms her anxiety and that is piecing together jigsaw puzzles. She absolutely adores puzzles and feels the most of herself while doing it. She then meets a kindred spirit, Robert (Irrfan Khan) who gets her into the world of the competitive jigsaw puzzle, much to the chagrin of her possessive husband (David Denman). 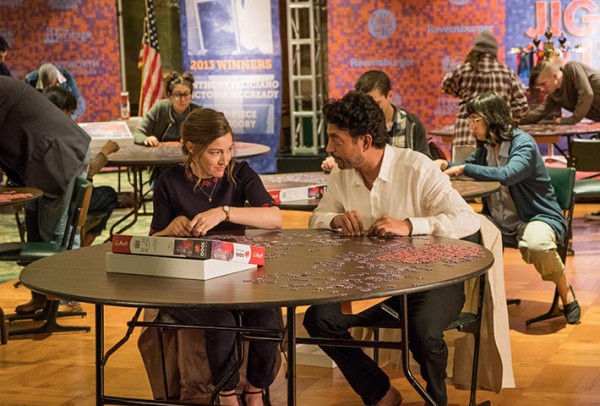 There’s a lot that goes on in the movie which is pretty evident with the Puzzle trailer and one could only hope that by the end of it, Agnes leaves her husband to be with someone like Robert.

Earlier this year, Puzzle released at the Sundance Film Festival and received some really great reviews from both the critics and the audience.

Along with Mcdonald, Khan, and Denman, Puzzle also stars Bubba Weiler, Austin Abrams, and Liv Hewson, and is directed by Marc Turtletaub. Puzzle is an English language remake of the 2010 Argentinian film of the same name.