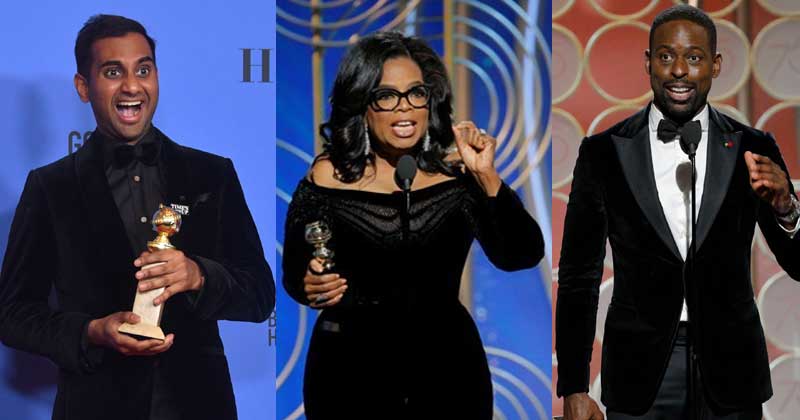 Golden Globes commence the award season in Hollywood and it’s always filled with some really interesting instances. However, this year, history was created with almost every award and speech.

This year’s first big award show celebrated the best in 2017’s TV and films. Plus, this year’s event also had a ton of representation in taking a stand against sexual harassment. People came decked in black to show their stand against the open-ended sexual harassment cases in Hollywood. When the news of black being the theme of Golden Globes got out, many considered it a mere publicity stunt, however, after the award show, one can easily understand that this was just the start of something revolutionary. This fashion protest was part of a bigger movement called Time’s Up.

Seth Meyers was the host for this year’s Golden Globes and through his monologues, Seth directly addressed the sexual harassment scandal to have rocked Hollywood in the recent months. From Weinstein to President Donald Trump, Meyers talked about almost everything hostile and made the audience gasp with a joke about Weinstein’s death.

Along with that, Sterling K Brown and Aziz Ansari took home the Best Actor Award, in TV Drama and TV Musical or Comedy, respectively. While Sterling K Brown was awarded for his phenomenal role in the hit drama series, This Is Us, Aziz Ansari won for Master Of None in which he plays the lead along with creating the series for Netflix.

However, this alone is not the news. Sterling K Brown is the first African-American Male Actor to win the Golden Globe for best actor in a TV drama. Along with him, Aziz Ansari was the first Asian man to win the best actor award in a TV Comedy.

Both the actors gave an exceptional speech, however, it was Sterling K Brown’s words upon accepting the award that brought together too many feels among the audience. Brown thanked the creator Dan Fogelman for writing race into the character that he plays on the show. “You wrote a role for a black man that could only be played by a black man, and what I appreciate so much about this thing is I’m being seen for who I am and being appreciated for who I am,” Brown said. “And it makes it much more difficult to dismiss me or anyone who looks like me.”

Ansari was his hilarious self while accepting the award and said, “I genuinely didn’t think I would win because all the websites said I was gonna lose.”

Other than Sterling K Brown and Aziz Ansari, there was one more person who created history, Oprah Winfrey. Meryl Streep is still loved and quoted for her last year’s Cecil B. DeMille Award, however, this year when Oprah won the award she reminded everyone in Hollywood that there’s only one queen and it’s Oprah. She became the first black women to receive this prestigious award in the Golden Globes history.

Check out her speech here:

Apart from these history-creating wins, Three Billboards Outside Ebbing, Missouri, Big Little Lies, and Lady Bird were the big winners of the night. Saoirse Ronan, from Lady Bird, won the Golden Globes in the best actress, Musical or Comedy category. Whereas, James Franco took home the best male actor award in the same category for his work in The Disaster Artist.

There was also a Natalie Portman bit that created a huge buzz online. Portman, along with Ron Howard, was on the stage to announce the winner for best motion picture director at Sunday night’s Golden Globes. The Academy Award winner didn’t let the opportunity to make a statement slide, and said, “And here are the all-male nominees.”

Natalie Portman calling out the all-male nominees in the best director category is extremely a 2018 mood. #GoldenGlobes https://t.co/Q2L7ieDBjm

With an end to the Golden Globes, the viewers are not waiting for the Academy Award season to kick off, ASAP!