Why we will never understand Jim Morrison, at least, fully?

In some ways, it’s heartening to note that the man behind the phrase- “is everybody in, the ceremony is about to begin,” exited the room quite early himself.

But then, he already had made one hell of a noise in that room already.

People whom the God’s call early are always busy. Maybe that is why, even today, seven and a half decades from his birth anniversary, Jim’s seems the ideal voice shortlisted (in 1970) for the life after death awards and probably for the times to come.

He wasn’t a howling wolf. He wasn’t a tumbleweed. He could’ve been a squeaky wheel that may have got all the oil had he been up to no good in life and been born to a life of privileges.

Thank god, that wasn’t the case. How a man of flesh and blood but boasting of Einsteinish IQ went on to become a rock poet; becoming an all-encompassing artist, one whose sum of all parts was about as intriguing as every sum, should in itself, warrant a psychedelic case study that could succeed in making fragile eggshell minds into electric shamans.

But thank god no such course- for all you know they may have attempted to nurture some actually- was attempted, thus leaving rock music’s Socrates meets Michelangelo meets Tesla an enduring enigma.

Here’s proof. Jim once famously recited in his poem from an American Prayer, ” Death makes us angels of us all and gives us wings where we had shoulders as smooth as raven’s claws.”

Quite similarly, no other Rock singer of his time made Psychedelic Music seem like a Mecca of a powerful religious experience as if it was a pilgrimage receiving devotees of all spheres, cultural strata. Daniel Sugarman has said that when you attended a (The) Doors concert, you felt some kind of levitation; as if it were a religious event Jim raised the bar one thought didn’t exist.

Jim never cursed the gods, like with most other bands that often go too far- for the comfort of devotees if not so much for those of atheists- in their search for existential lyrics. Where was the time? He was far too obsessed with the devils within.

He was far from being an ideal man, one who told to ittle girls and boys to follow.

Hell, that wasn’t him.

Since when did a Backdoor man- who the men didn’t know but the little girls understand- become a figure of inspiration?

Jim was dancing to the tunes of not just his heart, but of his soul. Reason? He craved for and eventually sought, the communion with the higher spirit. He was able to do so because he possessed, a “Universal Mind.”

The good thing was that his tickets were free to the shamans who he’d invite on stage, or inside the recording studio every single time he’d bring the skies closer to earth in his immersion into music, rock, poetry and whatever the hell he was able to do.

The lucid Jim, one who covered every length and breadth of a pool where intellectuals way before him swam, be it, William Blake, Socrates, Oscar Wilde, Arthur Rimbaud, Huxley, Kerouac, become Jimbo, a bringer of remorse, a perplexing figure touched by search for love as also marred by an inkling for death.

Where was another musician who was driven by such powerful polarization of his own mind and senses?

No other singer spoke as much about death as he sung about it.

No other singer made music about it, dripped in contemplation, laced with philosophy as much as Jim Morrison. Rock bands, there have been many. Some may even have created their own doors to imagination. But none, quite frankly none, were able to break on through to the other side and see what lies there.

Rajneesh Osho is known to have famously said on Siddharth Buddha, “Buddha is that peak of magnificence whose finality (or peak) is often beyond the reach human capacity.”

In that regard, you’d think of James Douglas Morrison of Melbourne, Florida- a boy who was sexually abused, the teenager who drew obscure faces fantastically well, the grown-up who hooked up with both books and girls simultaneously and the man who met Ray at the Venice Beach- as being a carnal force of catastrophic energy that hit the earth like a Haley’s Comet with passion and vigor and turned every piece of lyric into golden dust before allowing himself to be consumed by the many vices of life.

Okay, let’s limit them to two- drugs and alcohol.

Possibly where Jim Morrison allowed himself to be understood is by virtue of his meaningful lyrics and the sincerity with which he spoke of his life, about being the child whose body was being rented without pay by Red Indians on ‘Dawn’s highway.’

Possibly where Jim Morrison’s ego comes in and restricts, going as far as preventing any further understanding of his genius and his personality

He was fire meets ice. He was also the cool breeze over the mountains. Yet, he didn’t aim at reaching for the skies. That would’ve been cheap in his books. The atmospherics around him sprang with passion with his hypnotic voice reverberating in them.

“A city rises from the city. I had a splitting headache from which the future is made.”

He didn’t sing desperately but appeared howling like a carnivore out to avenge himself or correct a wrong. In the short while of nearly 26 years and a few months, he had gone so far out that as per the saying, it was clear, “One day, Jim Morrison might not come back.

There may actually be no sacred fire that exists among us in this mortal world that can rise up to match Jim’ luminosity.

There may not be a girl who’d turn down Jim upon being asked a simple innocent question, “Hello, I love you won’t you tell me your name.”

Morrison often quoted Blake. He’d say, the “road to excess leads to the palace of wisdom.”

Probably as someone who’d have loved to have Jim live for many more years despite realizing temptations such as this are often realized in wild imaginations, you can be pardoned for thinking that James Douglas Morrison did indeed take to the road.

But wasn’t his road one of excess.

But didn’t that same road take Morrison on a bit of a trip to exile?

Was Jim Morrison a free liberated man as seen on live concerts and video footages thankfully god’s good souls have saved for us? Or was he pained by something?

What truly defined Jim Morrison- was it the long derangement of his senses or the peak of sadness as experienced by the curse of being a celebrity?

Which Morrison does one long for? The one who often blew music rehearsals only to come alive on the stage like a Lizard King, touching his bandmates’ hearts like an unsurpassable electric poet or the Morrison that may have lived a lot longer had he possibly also read the philosophy of Buddha; that harmony lies in balance which would then have meant going slow on the bottle and pills, powders and absinthe?

Morrison wasn’t a fish in an aquarium of talent. He was the barracuda among the many tiny floaters around him. The world was his playground, the skies his residence. Yet, for a man who often seemed way over his head as to be speaking up from glistening white clouds took content in being buried a few inches under the ground at para la chaise. Thankfully he let his body to be found, if only for it to be stacked beside literary luminaries under a bust that fans, who won’t let him rest, damaged a few days back! 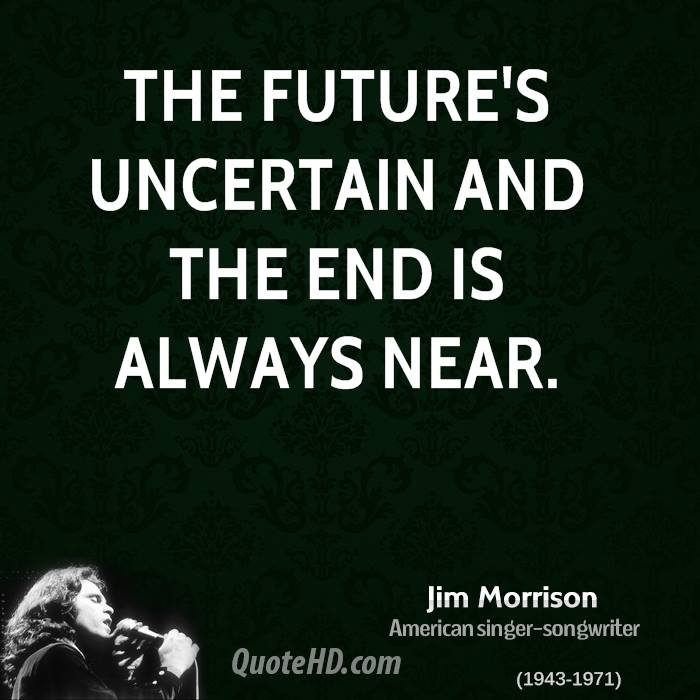 In the trivial but heartening attempts to understand Jim’s massive life, in the many small nook and corners of his mighty heart reside both heaven and hell, pain and its cure, and ultimately a spirit that perhaps seemed wounded by the sense of self-discovery, but one that was also its own cure!