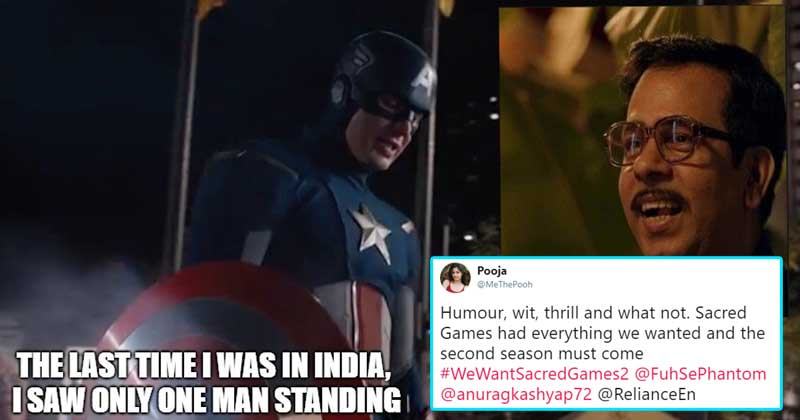 If you don’t know what Sacred Games is or what it means and why fans are going completely gaga about it, then there’s just one question that we would like to ask you. Have you been living under a rock or what?

Sacred Games got recently released on Netflix and it’s a brainchild of Anurag Kashyap and Vikramaditya Motwane as producers and written by Vasant Nath, Smita Singh, and Varun Grover. However, it’s not an original and is based on a book by writer Vikram Chandra that goes by the same name. This story takes place in underground Mumbai and revolves around the lives of Mumbai gangsters and honest Mumbai cops.

This one is the latest in Netflix’s international campaign in India, which offers both a vast pool of potential subscribers and an entertainment industry with global appeal. And, the love that Sacred Games has received till now is substantial to understand how amazing the show is and how well received it has been among the worldwide audience.

Constantly being compared with another Netflix hit Narcos, due to the similar genres the two comes from, one can only hope for Sacred Games to go as big as Narcos on the international front.

As for this crime-thriller fans, they’re turning out to be one of the most hardcore and energetic fandom in India right now. It has not even been a month since Sacred Games is released in the country and people have already started asking Netflix for Sacred Games 2. After all, who wouldn’t want to know which other twist and turns the story takes in the future, along with a probable fail or save.

Motivating their thirst for Sacred Games 2, the fans have filled Twitter with tonnes of memes and tweets in relation to the show and its characters. If you are someone who has already seen and loved the Sacred Games then this entire compilation would be nothing but a treat for you, however, if you have yet to diverge in the realism of this show then we would like to give you some statutory warning for any possible spoilers in this post.

Truly an interesting series made in India and people loved it #WeWantSacredGames2 pic.twitter.com/SENd1U1Iuy

#WeWantSacredGames2 because let’s be honest, Trivedi was exceptional and so was his performance! pic.twitter.com/elhwcqEsmQ

The series just brutally takes down on all other shows #WeWantSacredGames2 pic.twitter.com/Gw2Uzs8zHL

made us fall in love with his character #WeWantSacredGames2 pic.twitter.com/DQ4CuDbBBh

So happy that deliciously dark content series has worked in India and people loved it #WeWantSacredGames2 pic.twitter.com/vW0jHuvCe3

Humour, wit, thrill and what not. Sacred Games had everything we wanted and the second season must come #WeWantSacredGames2 @FuhSePhantom @anuragkashyap72 @RelianceEn pic.twitter.com/K54416788r

A Sacred Games fan or not, you have to acknowledge the fact that one show has quite possibly put India on the map in terms of a producer of gritty entertainment, something that the world does not instantly relate us to. The show has changed the way people look at Indian content, which is why they’re being lauded by not just the critics but also by the audience, on an international level.