When Varun Dhawan got out of his car’s window to get a selfie with a fan, riding on a rickshaw, he wouldn’t have thought of being schooled and challaned by Mumbai Police, that too on Twitter.

Yes, that’s just what happened to the Badlapur actor on a fine Thursday morning.

The Mumbai Police has time and again shown how aptly they use the power of Twitter to reach people and solve their complications. However, this time, they were not at all amused about Varun Dhawan’s selfie adventure and decided to reach out to him, publicly.

The Twitter handle of Mumbai Police wrote: “[email protected]_dvn These adventures surely work on D silver screen but certainly not on the roads of Mumbai! U have risked ur life,ur admirer’s & few others. V expect better from a responsible Mumbaikar & youth icon like U! An E-Challan is on d way 2 ur home. Next time, V will B harsher.” 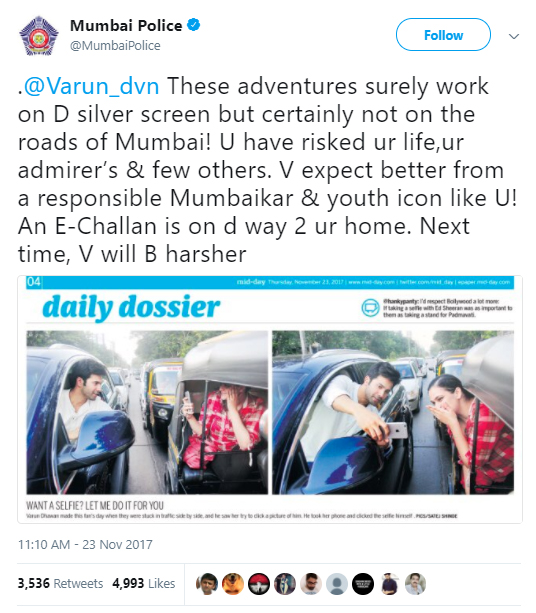 This particular tweet got more than 2k likes within half an hour of its posting, and it also reached to the actor on time.

Apologising for breaking the rules, Varun tweeted back, “My apologies Our cars weren’t moving since we were at a traffic signal and I didn’t want to hurt the sentiment of a fan but next time I’ll keep safety in mind and won’t encourage this.” 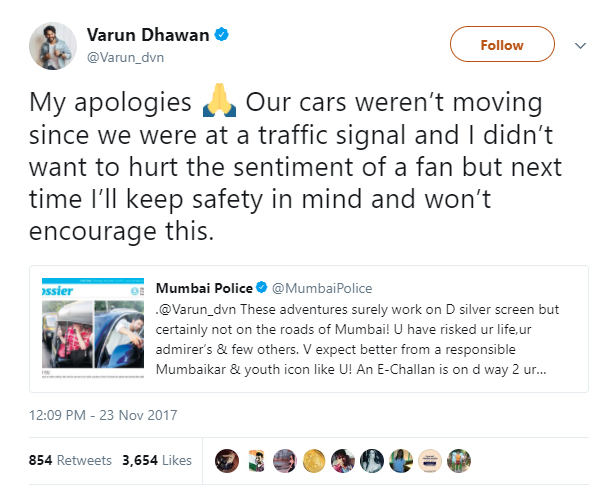 We have finally reached the age where the authorities are trying their best to get along with the public, without any barriers or middlemen, and Mumbai Police is a big example of that. Their Twitter handle is known to put the right message forward with a lit bit of humour and a lot of pop culture references. Plus, they’re also prompt with answers to the queries of people of Mumbai.

As for Varun Dhawan, he’s currently riding high with a good box-office presence in 2017 with Judwaa 2 and Badrinath Ki Dulhania. Currently, the actor is working on Shoojit Sircar’s October and after this, he will be seen alongside Anushka Sharma in Sui Dhaaga, Karan Johar’s film Shiddat and Remo D’Souza’s ABCD 3.

However, Varun sure would remember this challan for a long time now.