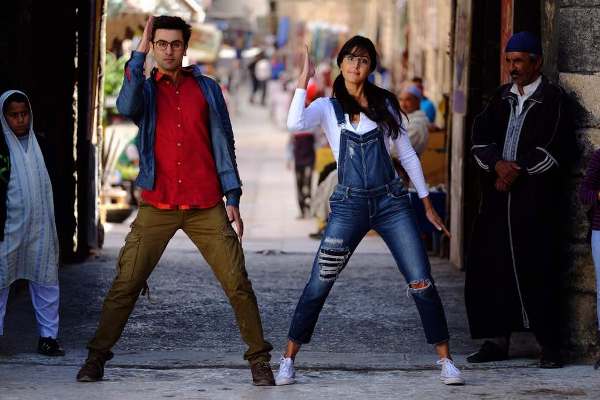 Jagga Jasoos’s first track, ‘Ullu Ka Pattha’ is here and the song is as quirky as its title, however, it offers us some very interesting things to look forward to. Jagga Jasoos has already been claimed as one of the most awaited films of 2017, ever since it went on the floors. And, a lot of things are responsible for that, from Anurag Basu’s perfectionist approach towards the film to the lead characters’ camaraderie on the sets. However, now that everything is sorted, we have finally been graced with another peek into the mystical world of Jagga Jasoos, with ‘Ullu Ka Pattha’.

Shot in Morocco, “Ullu Ka Pattha” showcases an unusual journey of Ranbir Kapoor and Katrina Kaif’s character. We have to admit this, even the song left us confused, as the “Jagga Jasoos” trailer did. The leads can be seen dancing on the streets for people’s entertainment and money to keep going on this journey, where they’re also in the search of someone.

Another thing about this peek in the “Jagga Jasoos” universe, is that both Ranbir and Katrina are looking too cute to handle. Plus, their dance moves just can’t be matched.

Along with a great and completely fun to watch, video, “Ullu Ka Pattha” has been voiced by Arijit Singh. This song is a breath of fresh air for many Arijit fans who were stultified of listening to only one genre by the Singer. Amitabh Bhattacharya’s lyrics goes perfectly with Pritam’s music.