The rendition of 90s songs has become the new fashion in Bollywood. It’s a perfect recipe for marketing and luring people to watch the movies. From A. R. Rahman’s “Humma Humma” to the Iconic “Tamma Tamma” has been recreated, not even that the old “Kala Chasma” and “Laila Main Laila” has also been roped in the lists of remixes and recreations of the songs.

Of course, people have loved most of them till now but Twitter saw a series of disappointments when the word got out that the iconic number “Tu Cheez Badi Hai Mast Mast” from Akshay Kumar and Raveena Tandon starrer Mohra is going to be revamped for the upcoming film Machine.

As soon as Twitterati heard the news, a long trail of tweets started opposing the decision. Some were totally against it and some were really tried to justify their “No’ with the sarcastic pun. 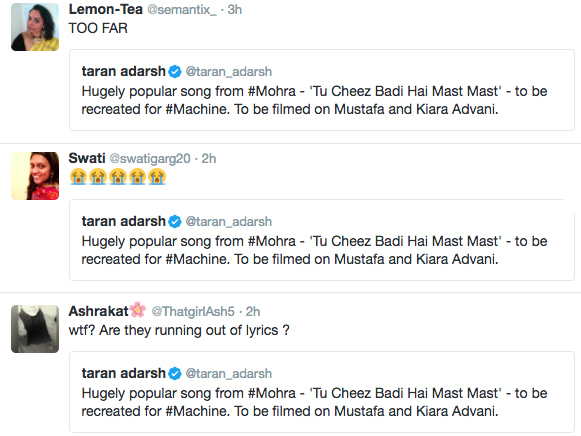 Machine is releasing in March and we just hope that they don’t ruin that iconic number for us.