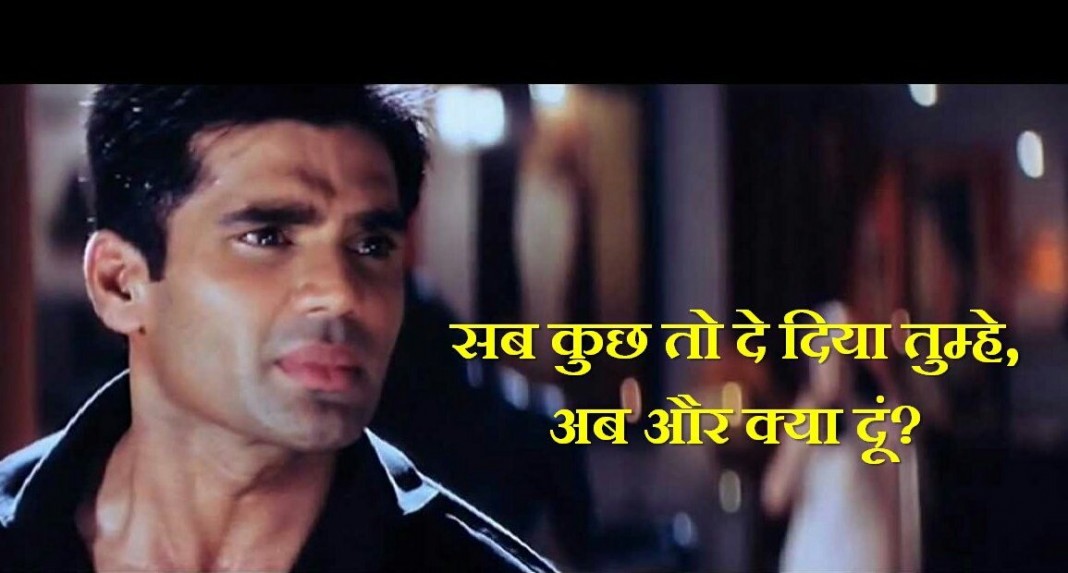 Suniel Shetty memes from Dhadkan are now the new Internet phenomenon that is taking Twitter by storm.

Memes are no longer the funny side of the Internet, they have now become a necessity which everyone needs in order to survive their boring and mundane life. Which is why memes now have the power to almost shape the lives of people who are highly involved in them. From Sonam Gupta Bewafa hai to what not, and this week’s favourite meme involves 90s superstar Suniel Shetty.

Popular for his gangster looks and a despicable voice, Suniel Shetty went on to create his mark on Bollywood. One of his films that did fairly decent on Boxoffice, but created a huge mark on broken-hearted lovers who easily resonated with Shetty’s character. In one of the scenes of the film, Suniel Shetty says, “sab kuch toh de diya tumhe, aur kya du”, which translates to “I have given you everything, what more should I give?”

This line alone makes up for a great meme and the same happened, Twitterati started attaching this dialogue with some of the life’s most difficult situations that most of us have been through. And, let us be clear to you on this, it is nothing short of brilliant comedy for which Twitter was originally created.

Check out all the hilarious samples of the memes and captions attached to them.

When you don't get a good appraisal. pic.twitter.com/kN2YiiYFr2

*During Project Sign Off*
Customer – This is what you have delivered?
Me: pic.twitter.com/DVcUr0m6Id

When landlord asks for advance after brokerage and deposit!

Me to Starbucks counter guy while paying the bill. pic.twitter.com/S81GlaA4Tg

When you are talking to the customer care & they keep asking random information. pic.twitter.com/BWKgC3PSLX