Home Entertainment Bollywood Sara Khan Pushes Her Own Luggage At Airport. Is This Brave and... 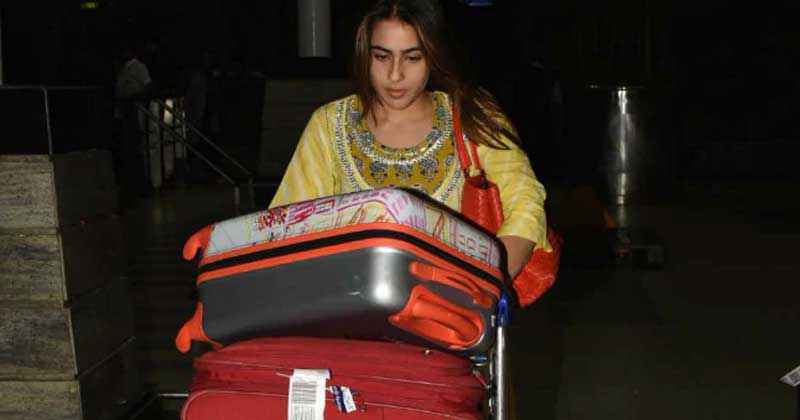 Fearlessness and independence are often twin attributes of some special souls. Often, it seems, the two cannot exist in isolation. There are several examples of this anyway from the most common circles in life.

There are hundreds and thousands of women in India who have lost their better halves and have no one to fall back on for financial support. Incredibly, most of such women end up raising children- in several cases, 2 of them- on their own.

Ever heard of daughters of rickshaw-pullers who turn up as civil services aspirants and end up, in many cases, as fully qualified personnel? Heard stories of acid-attack victims who prove themselves as unputdownable in terms of dire straights, refusing to fade away into oblivion, despite facing the life-altering ignominy of having their face toyed with, with the severest of substances?

Found the likes of Lakshmi walking the ramp? Moreover, heard of a septuagenarian chai and snack seller in Jaipur who serves around 250 destitute people every day, without a fail?

Recently, we saw actor Hrithik Roshan portray the life of a real hero of sorts, Bihar-based Math teacher Anand Kumar behind the renowned Super 30? For someone, who couldn’t afford to forge a career in the revered IIT but made it a mission of his life to handpick, tutor, train and educate kids to further their careers in the venerable institute, is that not an example of something bold and daring?

Is their tale more inspiring or is that of Sara Ali Khan- a beautiful, talented actress- pushing her own luggage at the Mumbai airport? A few hours back, there emerged a flurry of images on the internet showing noted actress behind films like Rishikesh, Simba moving along her own luggage on a trolley minus any help whatsoever.

This was considered an impressive feat. This was sort of surreal, for there’s clearly no other way to put it, given the hype around it. Folks in and out of the Tinseltown were impressed and the picture was painted as being something unique, whatever that was.

That said, one has got to ask? Is the unfailing love for anything celebrity or riddled with the celebrity culture so obsessive that we simply begin talking about stuff as inconsequential as this?

One has got to ask something and quite honestly. Tomorrow, if Mr. Modi is found tying his own sandals whilst visiting a temple, would this become a media rage too?

Will the picture generate over one and a half million retweets because the most powerful and prominent figure in the world’s largest democracy didn’t seek any assistance in doing something as basic as tie his laces or put his boots in place?

What on earth are we becoming?

Rahul Dravid, a former member of the Indian Cricket team, someone with 36 Test centuries, over 13,200 Test runs and the man responsible for facing most number of deliveries in Tests goes around in autorickshaws, waits in queues at every public place and ends up at his home as the same earnest, nice, mild-mannered bloke we’ve known him to be.

Minus any hype. Minus any shenanigans.

Did we retweet his picture and break through the busy social-media corridor and remain sleepless at nights? Common sense and you don’t need psychology to prove your point suggests that obsession behind a celebrity doesn’t make you one.

A few years back, a literally homeless kid Budhiya from the eastern belt of India made a name for himself by proving himself to be a long-distance runner. He didn’t have any element of celebrity attached to him. There were no sponsors. There was no Facebook page in his honour. His father didn’t own royal havelis in Pataudi.

The kid even inspired a movie starring Manoj Bajpayee.

It doesn’t increase your bank balance and salivating after every minuscule movement in the life of your favourite people doesn’t make you into a celeb. They’ve reached there out of their pure hard work. Not by hanging out on social media, not by waking each day and signing off every night by lighting incense sticks in front of their role models’ pictures.

Perhaps, it about time that we left obsessing about Sara Ali Khan at the airport or for that matter, the fact that her moving her own luggage didn’t reduce the price of onions or increase the price of fish.

After all, don’t we have anything better to do?