Home Entertainment Bollywood Rishi Kapoor Lashed Out To The Cartoonist Who Made The Fire At... 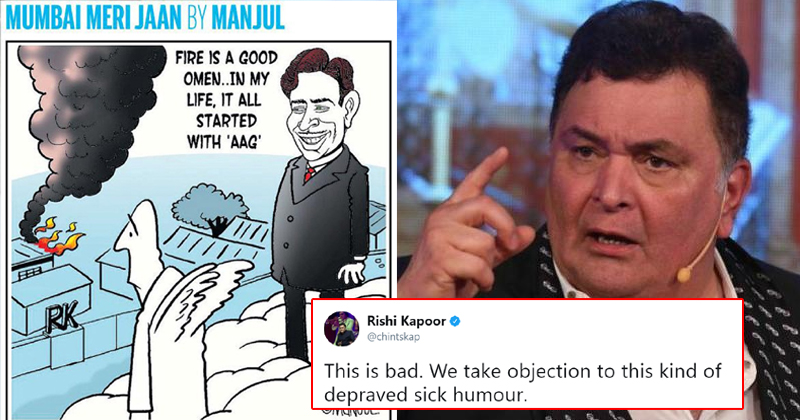 On Saturday, in a dreadful incident Stage, One of the iconic RK Studios in Chembur caught fire and left Kapoor family in sorrow. The famous iconic Mera Naam Joker mask wore by Raj Kapoor and other costumes worn by all RK banner heroines were lost in that fire.

Rishi Kapoor was in remorse and he put across his sadness using his twitter handles.

Sad A major fire broke out at RK StudiosWe have lost the iconic Stage 1 Thankfully no casualties nor injuries. All your concerns appreciated

A Studio can be built again but the loss of the irreplaceable memorabilia and costumes of all RK Films,is tragic for all. Fire took it away

Rishi Kapoor was hardly managing to overcome this incident as the loss Kapoor’s generations worth of memorabilia wrenched his heart. Manjul Toons, a cartoonist managed to wake the rage of King of Twitter controversies. He published a cartoon about the incident and suddenly all hell break loose.

One of the most distasteful & reprehensible cartoons I've seen in ages. @chintskap pic.twitter.com/3FQsvvJig3

A Twitter user brought the cartoon to Rishi Kapoor’s attention. The picture showed Raj Kapoor in heaven looking down on the fire that burnt RK Studios and referred to his debut film ‘Aag’. Manjul Toons managed to make a connection between Raj Kapoor’s ‘Aag’ and the incident of fire. Rishi lost his cool and took offense.

This is bad. We take objection to this kind of depraved sick humour. https://t.co/oNNhrZe7Ng

He called it sick and humor and as soon as he tweeted his stance regarding the cartoon Twitterati followed and flooded Twitter with all sorts of reactions.

Its extremely bad humor. A loss and grave disaster cant be give this kind of laugh. Im with you Chintuji.

I support u sir…. Address nikalun kya iska… Let's go satyagraha on him

5. Sadistic Artist Or Just A Victim Of The Situation?

It's not even humorous. Shades of sadistic pleasure.

Seems @MANJULtoons Sir is losing his sense of Humor !

7. This One Seem A Personal Hater!

Manjula has always had a sick sense of humour. His drawing r sadistic & normally make fun of unfortunate incidents..artistic freedom my ass

Really in bad taste. I hope people understand sensitivities. We are with you in this and pls let us know if we could do anything in anyway

Sick people only pose with sick humour. I pray greater loss happens in his life and we can then joke about him

There is no legal provision against sick mind. Unfortunately @MANJULtoons is losing it in a bad way

Take it easy sir. May this man's words come true. And "Kapoor and Sons" really do exponentially well from here on!

Learn to take the joke. The cartoonist is actually telling you that something good is gonna come out of this.

Respectfully,it's possible the cartoonist was tryng to portray raj Kapoor Ji taking the whole thing in stride n saying "the show must go on"

The incident of the fire in RK Studios is certainly devastating. Probably that’s why the humor put up by the cartoonist was way too tickling for the family.