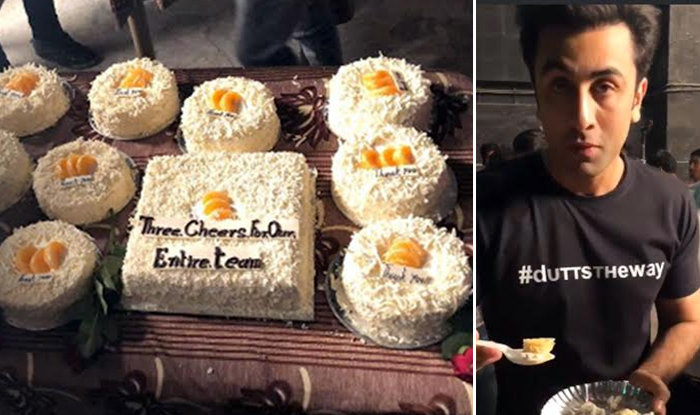 The much-awaited Dutt Biopic, directed by Rajkumar Hirani and featuring an extremely talented cast including Ranbir Kapoor, Sonam Kapoor, Dia Mirza, Manisha Koirala and Paresh Rawal, has finally wrapped up its shoot. The entire movie has been in news ever since it was decided to even be made. From who’s being cast for which role, to Ranbir Kapoor’s looks as Sanju Baba, everything has kept the Dutt Biopic alive in the media.

However, on Monday the crew and cast of Dutt Biopic, celebrated their last day on the set and had one heck of a time.

The official announcement for the wrap up was done through the fun video by the cast and crew. In the clip we see Ranbir Kapoor singing ‘That’s the way I like it’ while director Rajkumar Hirani along with Sonam Kapoor and the rest of the team follow him with ‘Ah ha Ah ha.’

The makers of the movie have decided to introduce a new hashtag for the film, ‘Dutts The Way’, which confuses the viewers. Could this be the official name of the Dutt Biopic, since nothing has been finalized about the title yet and considering, the entire cast and crew are wearing tees with the same hashtag on them. However, Indian Express has reported that this might not be it. Which means, that we would have to wait for some more time to get the official title of the movie.

This multi-starrer biopic is considered to be a must-see for every Bollywood, especially Sanjay Dutt fanatic. The man has lead a life of various ups and downs, which makes the entire experience even more enthralling.

Check out the video and pictures from the last day.

#Duttbiopic “From favorite actor to watch.. to the actor I dreamt of working with the most.. to actor I worked with so closely! Thanks R, for making this such an easy and memorable ride!” – Ranbir with the costume designer, Eka #DuttsTheWay #RanbirKapoor #officialrkfc

93 Likes, 1 Comments – Ranbir Kapoor (@officialrkfc) on Instagram: “#Duttbiopic “From favorite actor to watch.. to the actor I dreamt of working with the most.. to…”

#RanbirKapoor #SonamKapoor and #RajkumarHirani Celebrate The Wrap Of The #Duttbiopic

Both the director and lead actors of the Dutt Biopic have called the movie one of the important projects of their lives and are trying their best to do the best with it. The movie is set for a June 39 release, which would lead it to a clash with Diljit Dosanjh’s sports drama, Soorma.