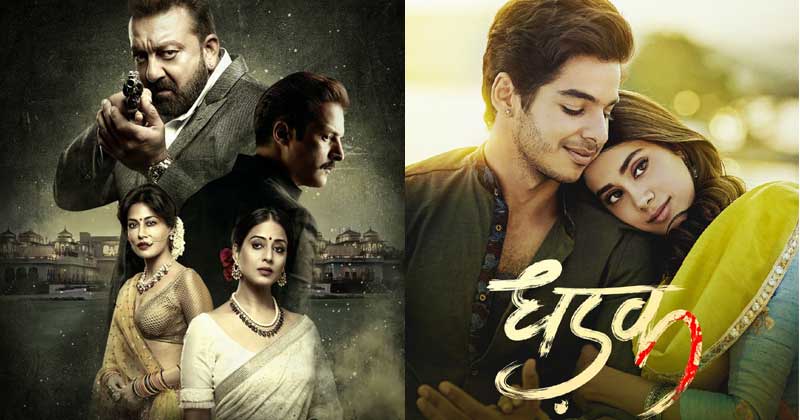 June was one heck of a month for Bollywood with some of the most amazing releases, breaking some of the most unconventional records on box office. It started with movies like Veere Di Wedding that initiated a lot of conversation of what women-led movies can do and end with Rajkumar Hirani and Ranbir Kapoor’s Sanju which is considered to be one of the biggest releases of this year, already.

But, we’re done with June for good and now comes July, also 2018 is half done which still seems pretty difficult to digest.

As July enters, we have some of the most-anticipated releases of 2018 like Diljit Dosanjh’s Soorma and Janhvi Kapoor and Ishaan Khattar’s Bollywood debut – Dhadak. Along with these two, Sanjay Dutt is also coming back to the movies with Saheb, Biwi Aur Gangster 3, as the bad guy, he was once loved for.

There’s a huge variety of releases in July that will both entertain you and make you think twice about your decision, but then that’s exactly what we strive for, a good mix of everything. Here’s the list of Bollywood movie releases in July 2018.

Fry Day is Punjabi movie about three friends and a cop, though no relations between these four has yet been established in the trailer. It features Govinda, Fukrey star Varun Sharma and Punjabi-music artist Hardy Sandhu. Directed by Abhishek Dogra and produced by Sajid Qureshi, Fry Day seems to be an average buddy comedy.

This is where the entire Indian television industry got together to make a movie and have no meaning to it, at least that’s what the trailer shows. Without much guess, it’s a comedy movie about some people making a movie and then gangsters get involved in it, yes it does sound very familiar. Actors like Rajneish Duggal, Krushna Abhishek, Nazia Hussain, Sunil Pal and Rahul Dev are involved in the project.

Based on the life story of Drag-Flick King and former Indian Hockey Team captain Sandeep Singh, this Diljit Dosanjh starrer has already piqued the interest of many with its trailer and music videos. The story is considered to be a unique watch and since biopics and inspired stories are already churning out good mullahs, this one will definitely leave its mark. Apart from all that, there are Diljit Dosanjh and Tapsee Pannu in it, and they’re already a big deal in the movie business right now. Soorma is directed by Shaad Ali.

Bollywood kids making their debut with Dharma Production always brings in a lot of attention and considering this one is a remake of a super-successful and National Award winning movie – Sairat – the stakes are high. So far, the movie is getting mixed reactions but it indeed would be a great thing to look forward to. Either it would be a great hit or a big mistake, but nonetheless, Dhadak will eventually become a stepping stone for actors Janhvi Kapoor and Ishaan Khattar. Dhadak is directed by Shashank Khaitan.

This third installment of Saheb, Biwi Aur Gangster is considered to be one heck of an exciting release in July, considering Sanjay Dutt is coming back as the bad guy for this one. Apart from that, the trailer looks super amazing and definitely something to look forward to. It stars Dutt, Jimmy Sheirgill, Chitrangada Singh and Mahie Gill in pivotal roles. Saheb, Biwi Aur Gangster 3 is directed by Tigmanshu Dhulia.

So, which one of these are you most excited for? Let’s know in the comment section below.