Born on 4 August, 1929 Kishore Da completes his 88 Birthday alive in our hearts. He is considered as one of the most successful playback singers of the Indian Film Industry and apart from Hindi, Kishore Da sung for more than 7 languages including Marathi, Bengali , Assamese, Gujarati, Kannada, Bhojpuri etc. 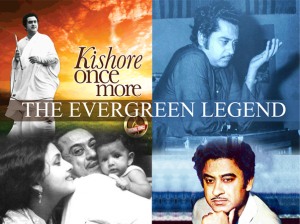 Versatile singer and a man of different moods, Kishore Kumar has his own style of singing Yodelling . His ability to yodel perfectly, sing off into any senseless rhyme and still return to the original was intoxicating. With his aberrant, romantic, deep, emotional and mettle voice he gave us so many songs that are beyond par excellence. Kishore Da won 8 Filmfare Awards for Best Male Playback Singer and holds the record for winning the most Filmfare Awards in that category.

He was the most carefree yet effortless Actor , He Introduced comedy into mainstream and made it a more evolved art. His freakish ,bizarre and quirky appeal on screen added fun for his audiance, when they watched him.

Kishore Da produced, directed, acted in and composed the music for Jhumroo, an immeasurable achievement. He never took his work too serious in life ,it was always his idea of fun, Infact Kishore Da held a reputation for always being late on the sets and Recordings.

It was S.D. Burman who made Kishore Da, the superstar singer of the seventies, when he chose him to sing ‘Roop tera mastana, pyar mera diwana’ for Rajesh Khanna .

Kishore Da made a record by being the only singer to have sung in more than 90 films for a single hero. Kishore Da sang in 91 films for Rajesh Khanna.

He sung for about 764 movies. Kishore Da recorded his last song on October 12, 1987, a day before he died and continues to live in our heart for Forever.