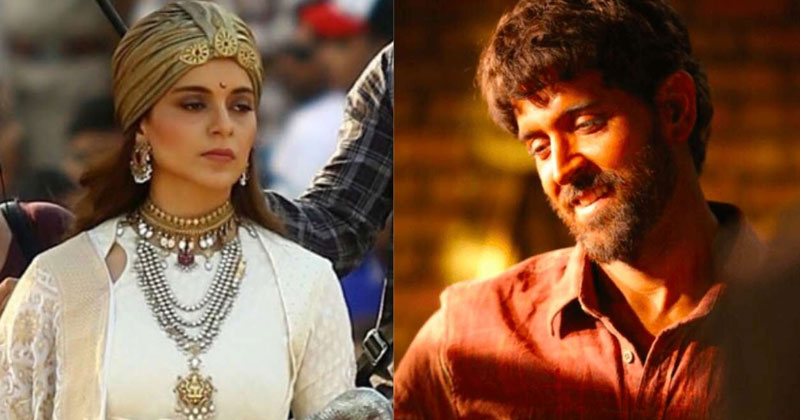 Kangana Ranaut and Hrithik Roshan are two people who have gathered some of the biggest headlines in the country, regarding their alleged relationship rumours. While some called it an actual revenge trip, others were quick to point to how everything went down for publicity. But in the end, everyone came on the same line and that was, we’re so done with all of this.

Now call it our bad luck or anything else, but the entire fiasco is once again going to be everywhere, all thanks to the Kangana Ranaut’s Manikarnika and Hrithik Roshan’s Super 30. The Hrithik Roshan starrer has been fixed for January 25, 2019 release, and the makers of Manikarnika today announced their release date.

Fans have already vouched for this clash to be one of the biggest of the year, considering there’s a high chance of these two not only promoting their picture but also leaving no stone unturned in spewing something against the other one. Now, if you’re a fan of it or not, you’ll have to admit that it’s going to be a fun ride.

Kangana Ranaut’s Manikarnika is based on the story of Rani Lakshmi Bai and her struggle of fighting the British colonists for the independence of India. As for Hrithik’s Super 30, this one is based on the real-life story of mathematician Anand Kumar. He is the founder of Ramanujan School of Mathematics, in which Kumar runs a program under which he selects 30 meritorious and talented candidates each year from economically backward sections of society and trains them for the JEE, the entrance examination for Indian Institute of Technology.

Talking about the film, Kangana has earlier told media, “This movie is sure to instill a feeling of pride among the people. There is no love story angle in the film,” Manikarnika was marred in controversy for “tampering with historical facts” and “indecent portrayal” of Rani Laxmibai. Clearing his stance, producer of the film, Kamal Jain said, “As responsible filmmakers, we have taken utmost care while portraying Rani Laxmibai’s character and have consulted historians and scholars. Rani Laxmibai was a freedom fighter and one of the most respected leaders our country has seen. She is a symbol of valour and the film’s story depicts the same.”

Apart from Kangana Ranaut, Manikarnika also stars actors like Ankita Lokhande, who is making her Bollywood debut with one, Atul Kulkarni, Sonu Sood, Jisshu Sengupta and Suresh Oberoi. This period drama was earlier scheduled for a November 29, 2018 release, however, the makers decided to postpone the release due to some unfinished portions of the movie.

Which one are you most excited about? Hrithik Roshan’s Super 30 or Kangana Ranaut’s Manikarnika.