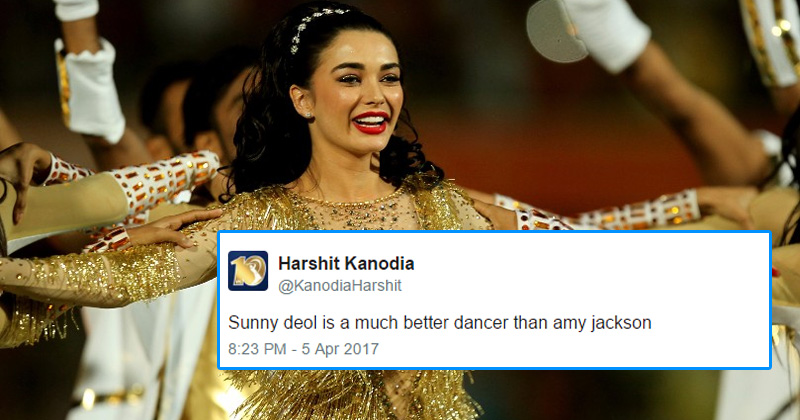 IPL 10, the tenth season of India’s most popular Cricket league had a kick start yesterday night. The opening ceremony of Indian Premier league held at Hyderabad and like always it was larger than life. Over the years we have seen that this ceremony brings a lot of glamor and amazing performances but IPL 10 opening ceremony left us in disappointment.

To begin with, it wasn’t thrilling as it had always been and then came Amy Jackson, who started performing at “Kala Chasma” and it seems that the organizers paid her less or nothing. Yes! Her dance was that disappointing. I mean why would the organizers of IPL 10 do that to us and moreover to her as well because Twitter never lets such a mistake go by unnoticed. So after a below benchmark performance at Rajiv Gandhi International Stadium,  Amy Jackson, became the latest twitter fodder.

Twiterrati Did What They Do Best And Some Of The Tweets Are Just Defining Why She Should Have Practised More!

Sorry Amy But Here Is What Twitter Thinks Of You:

Sunny deol is a much better dancer than amy jackson

#IPLOpeningCeremony
My dog dances better than Amy Jackson,
It's the worst of them all#AmyJackson can't dance saala

Amy Jackson is moving exactly like I would in a Zumba class.
When the instructor isn’t looking.#IPLOpeningCeremony

It wasn’t Amy only Twitter was unhappy about the whole ceremony and they spoke their mind out loud.

IPL opening ceremony looks like it was put together last night.

You watch #IPLOpeningCeremony for few minutes… and even RGV ki Aag feels like a classical film & most entertaining thing on the earth.

Teacher: Tell me a synonym for Disappointment
Student: #IPLOpeningCeremony