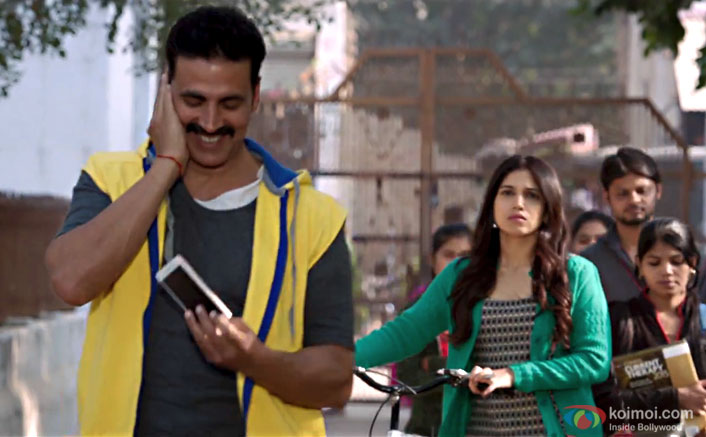 “Hans Mat Pagli” from Akshay Kumar’s “Toilet – Ek Prem Katha” is a light-hearted music number which has been sung by Sonu Nigam. And, while the song and its lyrics are light hearted and somewhat soothing, one just can’t completely ignore the video.

“Toilet – Ek Prem Katha” is inspired by Prime Minister Narendra Modi’s Swachh Bharat Abhiyan initiative and revolves around the unique love story of Keshav and Jaya. However, when we said unique we completely meant it to be around the concept of how a man fought for sanitation facilities for his wife. Unique doesn’t come for the way Akshay Kumar’s character expressed his love for Bhumi Pednekar’s character because let’s face it, stalking is not at all unique for Bollywood. You see, they have always glorified stalking that has led millions of men to believe that they can get any girl but following her around, day and night.

Yes, the film is based in a small village in India, and I completely get the point of how art imitates life and all, but one also has to understand the power that Bollywood has on the mindset of people of this country. This is pretty much the most important thing that one has to think about while making a movie.

I was right, no? Plus, the thing that pains me the most is how easily things like these are passed by the ever-so-discipline Censor Board of this country. The same Pahlaj Nihalani and his censor board, who don’t want the word ‘sex’ in Hindi movies or don’t even want to certify a film which is ‘female oriented’, however, the glorified stalking is just another masala for them.

“Hans Mat Pagli” is the first song from “Toilet – Ek Prem Katha”. It has been sung by Sonu Nigam and Shreya Ghoshal, however, Ghoshal’s part has not yet been released by the makers. Written by Siddharth – Garima and the music of Hans Mat Pagli has been given by Vickey Prasad.

“Toilet – Ek Prem Katha” is all set to release on 11th August 2017 and is directed by Shree Narayan Singh.