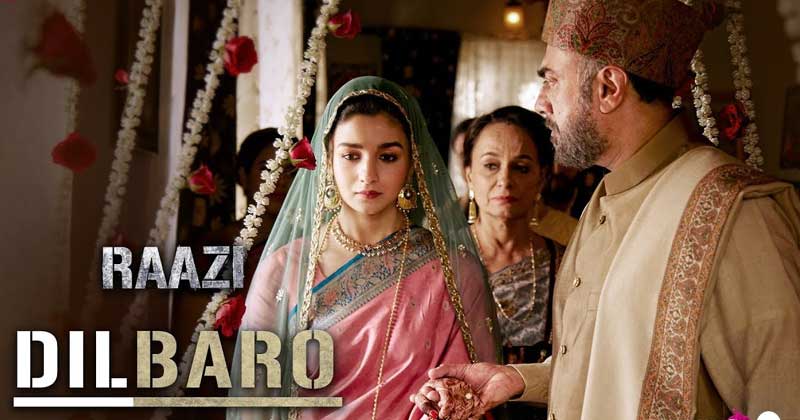 Alia Bhatt’s Raazi has already created a lot of excitement among all Alia fans and even among good movies’ fans. From the looks of Raazi trailer, the film seems to be based on a great story with twists, turns, and excitement orchestrated at every crucial point of the movie. However, the real greatness of a movie can only be discovered after actually watching it, and until then we can resort to music videos and other small clips released by the makers.

After the song “Ae Watan,” makers of Raazi have finally released another song to swoon in their audience, Dilbaro.

Everything about Dilbaro can be easily be chronicled as an extremely beautiful and emotional song that stands to be a perfect ode to the beautiful father-daughter relationship. Dilbaro plays as Alia’s character of a Kashmiri girl Sehmat gets hitched to Pakistani army officer Iqbal Syed, played by Vicky Kaushal. She’s now leaving with her husband for Pakistan and the song plays as the parent’s bid their goodbyes. Interesting, the Kashmiri couplets sung at the start of the song actually belong to a folk song often played during a bride’s bidaai ceremony.

The music, lyrics and even the voice of Dilbaro will move you and one just can’t stop listening to the track, it’s that beautiful. The track gives words to countless emotions that go unexpressed between a father and a daughter on the latter’s wedding.

The music of Dilbaro has been given by the trio of Shankar-Ehsaan-Loy and Shankar Mahadevan has also crowned a few lines in the track. For the Kashmiri couplet, Vibha Saraf gave her voice, while Harshdeep Kaur sings the Hindi portion of the song. However, the star of this song is definitely its lyrics that have been penned by none other than legendary, Gulzar.

Headlined by Alia Bhatt, Raazi is directed by Meghna Gulzar and the movie is all set to release on May 11.