Home Entertainment Bollywood Which Were The Best Bollywood Movies Of 2019? 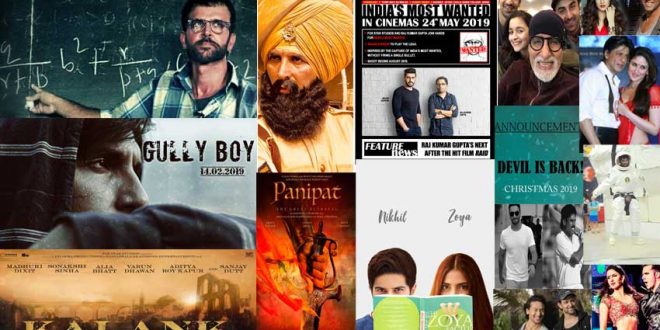 The usual talk about Bollywood, from a massy angle, tends to stop at the trinity and the power that stems from the three Khans; Salman, Aamir, and Shah Rukh. Okay, you could put Saif’s name to the list as well. But there are also actors whose individual talents have, for a while now, commanded attention and made the movie-going experience seem less clannish, i.e., “Bollywood-ian” and more wholesome or worth everyone’s while. And if there ever was a year that made the movie-watching exercise seem more meaningful than (in) recent years, minus the needless charades, item numbers, pointing to a shift in perception about the quality of the Hindi Film Industry then it was 2019. It could be said, this was a year that shifted the focus from the ‘hero’ leading the plot to the plot becoming the hero- right? And there were lots of story-driven, narrative-heavy movies made all the more memorable thanks to awesomeness in acting. So when it comes to the best Bollywood movies 2019, which films make up the list?

A film that compelled one to think about the power of Indian cinema from a lens that discards fashionable terms like Bollywood, paying impetus to substance and craft, Gully Boy was about as good a movie as any could be.

If there was ever a film that made Ranveer Singh‘s case even stronger as the credible actor he’s known to be then it was Gully Boy. A boy from a financially marginalized background, who rests and depends on the power of rap to convey the woes and travails of his life, one comfortably distant from any sign of comfort, was both a sensitive and powerful subject. It offered both hope and an emotional solace to the character and perhaps those who dare to dream. A powerful music score and the effervescent presence of Alia Bhatt made the ‘underdog’ drama all the more telling.

A filmmaker who doesn’t make films purely on ‘the power of entertainment’ but with a sense of purpose, Abhishek Choubey, who’s renowned for Udta Punjab, Ishqiya, Dedh Ishqiya, presented a crafty tale of bandits and took audiences on a rewind tour of the once dreaded Chambal valley where dacoits loomed large in India’s hinterland of the yesteryears.

But Sonchiriya, among the best Bollywood movies of 2019, didn’t just highlight the violence that stems from the brutality of the dacoits; it touched upon the moral burden that burdens the psyche of those who kill.

Alas, the audiences had other preferences upon the film’s release and Sonchiriya came and went without much ado.

A cop with an unwavering moral compass and heart to understand the plight of the oppressed. A society that still snubs and undermines the voice of the Dalit. And the drama that stems from the Dalit oppression and the lone voice of conscience that stands up for the marginalized (voices): Article 15 was perhaps so well made a tale that, it focused purely on the just and the unjust- the two cornerstones of its tale- lacking every deliberate quotient of entertainment expected from a usual Hindi movie. This is perhaps why it was less of a ‘picture’ and more of a ‘film’. Nonetheless, starring Ayushman Khurrana is perhaps the role of his vibrant career, the film was among the best Bollywood movies of 2019.

The heartening tale of the passion and the power of perseverance of one mathematician from Patna who rises against the odds to establish Super 30- a coaching centre for IIT aspirants in India, Super 30 infused the power of storytelling with the finesse of acting to conjure a heartening true story of Anand Kumar, the real face and force behind the Super 30 in Bihar.

At a time where much of the Indian film industry is chided for focusing on shenanigans and song and dance dramas, riding on Hrithik Roshan‘s fantastic character-driven saga, Super30 touched hearts and made a fine impression. Perhaps it also raised the realistic case for bringing more of such stories to our big screens.

Who wouldn’t want to see Nawazuddin in a film? To many of us who long for a good story, the likes of Irrfan, Manoj Bajpai, Pankaj Kapoor, Pankaj Tripathi do movies that quench our thirst for a real cinematic experience. For a while, the sincere and authentic actor, a world away from loud, screaming Bollywood heroes, has been doing just that while his more garish ventures- such as Munna Michael- also manage to entertain.

But in Postcard, not your average Bollywood film, we were reminded of the power that rests with Bombay in bringing two completely distant and disconnected characters together through the charm of exploring unexpected but pure love.

Who killed the second prime minister of the post-Independent India period, was the thrilling, mysterious, at times, eerie but telling juxtaposition of several possibilities that could hold the truth to the sudden demise of a man as respected as he was admired by many.

An ensemble of fine actors, many of which are recognized as India’s character artists, Naseeruddin Shah, Vinay Pathak, Pallavi Joshi, along with the likes of Mandira Bedi, Shweta Basu, Mithun Chakraborty steered an emotive and captivating wagon that offered thrills and goosebumps weighing on the possibilities of what might have been, going at times, to great lengths to point to “whodunnit” in the matter pertaining to one of India’s biggest unsolved mysteries.

While the film didn’t solve what is still India’s great puzzle, it opened our eyes to appreciate the possibilities that might have rested behind a veiled reality of that time, using a mix of suspense, conspiracy, and espionage to render a compelling tale to audiences who’ve long been fed the usual cliched doze of loud tear-jerking dramas in the name of Indian cinema.