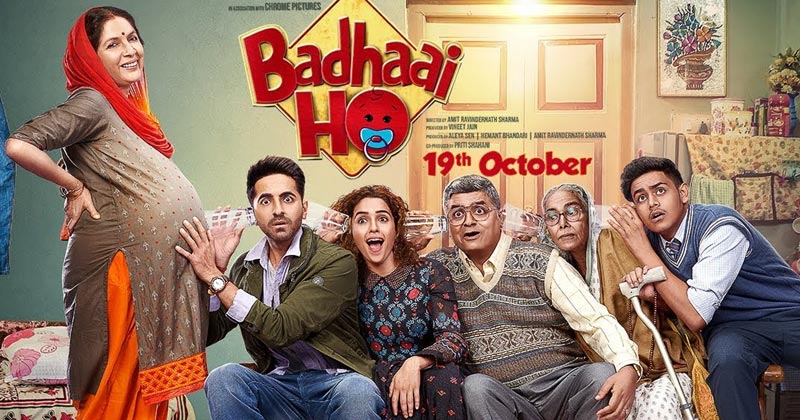 Starring Neena Gupta in a pivotal role with Sanya Malhotra opposite the ‘Vickey Donor’ actor, this one looks like an absolute laugh-riot with clear indications of changing the narrative about marriages and that crucial element of one’s life, ‘pregnancy.’

But embrace for a fact. This may just be a flick where Neena Gupta steals Ayushmann Khuranna’s thunder, given the rather intriguing role she’s been given!

But before we dive into what the flick is about, let’s consider some ground realities.

When you get married in India, you aren’t alone.

You just can’t be left alone.

Obviously, for a nation obsessed with marriages, one that prescribes the ‘right age’ for marriage, there are multiple questions everyone has concerning one’s private life. “When will you have kids”!

This isn’t a question, it’s a directive, signed, approved, authorised and, raised by the home ministry, led by one’s mother and joined as a chorus by the entire family. In that regard, it’s hardly a surprise that even when the child is born, there begins a turf war about naming the child. Who will have the final call may not necessarily leave the things in the hands of the parents.

Then there are the funny interventions made by one’s relatives and, of course, neighbours.

But before one gets into all of that, what’s most promising is to inquire whether Ayushmann Khurrana’s Badhaai Ho touches upon those subjects of reality.

And tell you what, it, in fact, opens the lid on a hitherto-rarely attempted subject area. Can you believe that the opening sequence of the film’s trailer now going viral- that’s what it seems- confirms the news of Ayushmann Khurrana’s mother’s (played by Gupta) pregnancy?

Whether this is an incredibly humorous take or something that just stifles the idea of comedy, one doesn’t know.

But what’s known is that marked by punchy wit and crackling dialogues, Ayushmann Khurrana’s Badhaai Ho is an engaging take on a sensitive subject area: of course, how else would one put it when one’s parent is shown pregnant in a flick?

Interestingly, what’s shown in the movie trailer is that the only person who seems chilled about the news of Ayushmann’s mom getting pregnant is his girlfriend, played by the jovial Sanya Malhotra. What remains to be seen in Ayushmann Khurrana’s Badhaai Ho is the impact that his mother’s pregnancy might have on the romantic chemistry between him and Malhotra?

At a time where Bollywood is openly experimenting with evocative subject lines and surprising audiences one too many, this, it could be said, seems a time for a change. And may that lead to an increased entertainment and fun for both the actors involved in a project as well as the audiences, who come through a lot of turnstiles to witness the best of Bollywood.