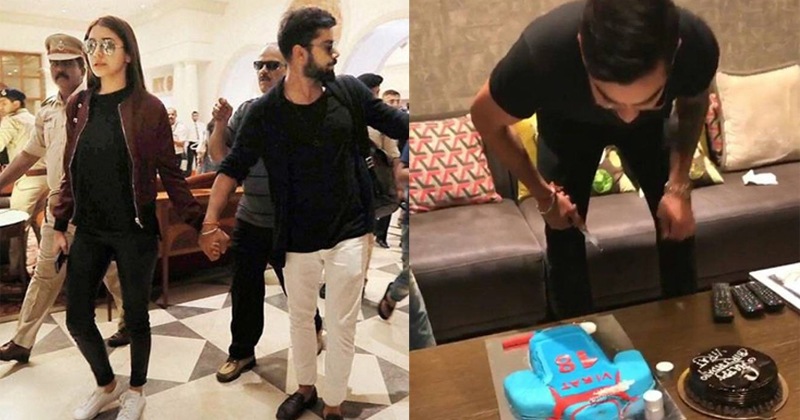 Virat Kohli celebrated his 28th Birthday on Saturday in Rajkot and like his game, his birthday too was full of surprises for us. Where media was dwelling between if Virat Kohli and Anushka Sharma are still together or not, they both walked hand in hand right in front of the world and clear all the false rumours of their break up that have been cooking around for some time.

Virat for sure is in his top form and Anushka’s success’ dice has been rolling in full power from “Dil Dhadakne Do” to “Sultan” to her latest release “Ae Dil Hai Mushkil” . These two together are the perfect example of the super-couple and surely shut down the saying ‘ Being in love makes you lazy’. They have been talked, trolled and teased yet their fans love them and it seems they don’t care if the world blames them for just being in love.

Virat celebrated his special birthday with his bea Anushka in his own style and these pictures shows that he is one of the most perfect boyfriends in the world.

Check out these pictures and videos:

1. They Are Not Even Trying To Hide…!

Yay to these two going all public! #AnushkaSharma snapped hand-in-hand with #ViratKohli in Rajkot.

2. Walking Beside Each Other!!

8. WHERE SHE GOES HE FOLLOWS!