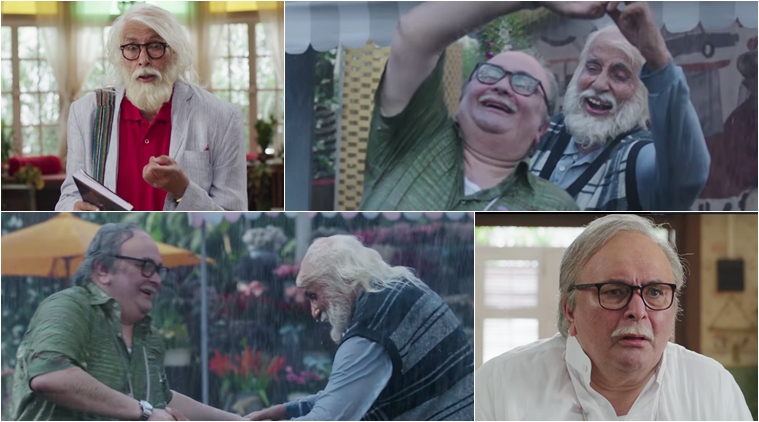 India’s most beloved actors, Amitabh Bachchan and Rishi Kapoor are back on the big-screen after 27 long years, that is exactly what the written text in 102 Not Out teaser opens up to. Both the actors have a legacy like no other and the fact that they continue to give some of the most amazing performances till now has simply been rewarding for the viewers.

Now, with their newest venture together, both the veterans are sure to win everyone’s hearts once again.

As shown in the 102 Not Out teaser, the film is a comedy about living life to the fullest and enjoying it till your last breath. The makers have also tagged the movie to about an unusual father-son love story, in which Amitabh Bachchan plays a 102-year-old man, father to a 75-year-old Rishi Kapoor.

However, from the looks of the 102 Not Out teaser, it’s Bachchan’s character that is full of life, whereas, Kapoor seems to be the one with the old soul. Various scenes from the teaser shows, Bachchan taking care of Kapoor and then advising him to join an old-age home, at the very end of the teaser.

102 Not Out teaser: Watch The Teaser Over Here:

The film is based on a Gujarati stage play by Saumya Joshi, about a father and son love story. Joshi also wrote the adapted screenplay for the movie. “The idea of adapting (the play) into a Hindi feature came from the fact that the relationship between a parent and a child is universal and the one where love supersedes everything else, including age! Amitabh Sir and Rishi Sir together are a dream cast for anyone,” said Umesh Shukla (Director), to Variety.

Umesh Shukla, who has previously directed OMG Oh My God!, directs and co-produces through his Benchmark Pictures, alongside Treetop Entertainment and Sony.

The talented duo, Amitabh Bachchan, and Rishi Kapoor were last seen together some 27 years ago in “Ajooba”.