Home Business and Economy Let’s have a look at some of the best Jack Ma quotes... 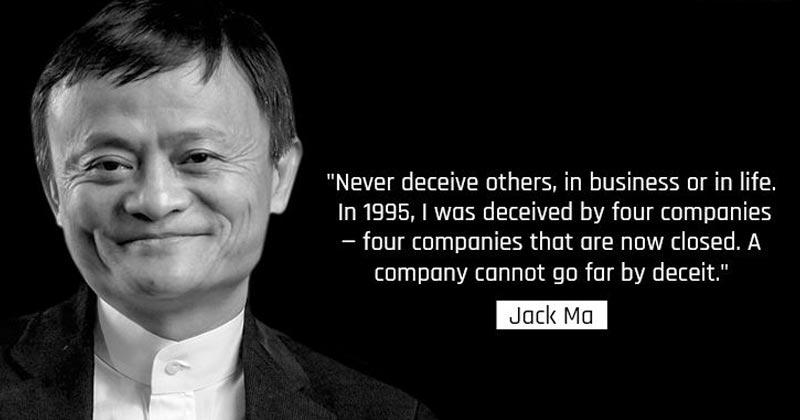 Some call him a business tycoon; others prefer to call him an ostentatious and daring business leader. There are many ways of describing one of the most successful entrepreneurs that there is. But there may not be a better way than saying that Jack Ma is charismatic.

In a world that was, till not so long ago, about American technocrats, investors, innovators, Jack Ma simply came out of nowhere and captured the highs that many would’ve thought were out of reach of a man hailing from the Oriental land.

Where E-commerce is concerned, it may never get better or bigger than the Alibaba Group’s success story. Jack Ma has created a niche to which he belongs as a ruler and one he leads with a voracious hunger to succeed.

Decades back, when it seemed that Amazon may not be able to make it big given the topsy-turvy journey of E-Commerce platforms, the success of Alibaba has catapulted China to the very top echelons of business.

Today, Jack Ma is one of the most successful investors, business leaders as well as a philanthropist. He’s both looked up to and admired; there may never be a day where, at least, in some corner of the world, Jack Ma isn’t being cited as an example or not quoted for charting a great journey.

On the occasion of the entrepreneur’s 54th birth anniversary, let’s visit the best Jack Ma quotes among the many attributed to him:

In all truthfulness, this is among the best Jack Ma quotes ever.

A lot that one gets to experience in the name of success isn’t probably that to be honest. There’s so much of plagiarism that is going on everywhere. At a time where there’s tremendous competition, one’s still got to uphold the dignity and honesty- principles that can truly afford one success. Well said, sir!

2. On the work-life balance

While it is important to keep oneself busy and occupied toward a constructive engagement, it is also important to maintain the balance between professional and personal endeavours.

To that end, finding the fine-art of balance between rigour and rest helps one attain the best that there possibly can be.

Even ‘Buddha: the enlightened one’ has shared that the essential touch and key of life rests in finding the right balance. Jack Ma here, merely reiterates what a wise spirit said ages back, in his own unique way.

3. On the importance of not giving up

Greatness stems from the idea of not giving up. Rome wasn’t built in a day. And no mountain is scaled with just a few steps. It takes effort; and a continuity of that effort to attain one’s goals, in the end. Therefore, it is important to not give up. This surely is, one of the best Jack Ma quotes ever.

4. On why it’s important not to trick or deceive others

Deception and trickery are poor shortcuts resorted to by the weak. The strong would never relent when the odds are stacked against him. There’s sense to persevere and be honest; absolutely honest with oneself. That said, another of Jack Ma’s fellow countryman, someone who died decades back in time shared the same view about being honest.

Bruce Lee also believed in the power of being absolutely honest to oneself and to never engage in an act that was concocted to trick people.

5. On what is even more important than technology

Today, we are in an age where technology is considered the greatest possible virtue of mankind. Surely, it wasn’t the case a few decades ago. It’s not such much about the obsession with a gadget alone that has given an unprecedented rise to technology. It’s the fact that increasingly more and more things are being digitized and the sphere of tech is reaching new highs that have changed the tide.

But Jack Ma insists that even behind the tech, what we fail to understand, is the limitless capacity of the human brain, and therefore, that mustn’t be undermined.

In the end, it can be said, a lot about a person can be gauged by his or her beliefs and passions. So, when it comes to this hitherto-less understood enigma, we can safely say that a lot about his life can be understood by some of the best Jack Ma quotes.