Maruti Suzuki Baleno RS: Is This The Ride For You?

Maruti Suzuki has finally entered the hot-hatch segment with the Baleno RS priced at Rs 8.69 lakh (ex-showroom Delhi), which is Rs 1.4 lakh higher than the similarly equipped Baleno Alpha but about half a lakh less than the Volkswagen Polo GT TSI.

Launched in October 2015, the Maruti Suzuki Baleno entered the market when Indian car buyers were finally going for the premium, larger hatchbacks that literally cost as much as subcompact sedans. The Baleno became an instant hit and sold almost 140,000 units via the Nexa arm and is still one of Maruti Suzuki’s most lucrative offerings, bringing enough profits for the company to spend some on a new variant.

When the company decided to jump into the performance hatch segment with the Maruti Suzuki Baleno RS, it triggered a lot of curiosity among the enthusiastic motorist inside us, after all, Maruti is a brand that everyone trusts with closed eyes. The Baleno RS is a similar concept and for people who’ve always aspired for a performance hatchback without shelling out a bomb, it is undoubtedly the best-rounded package for them.

However, when it comes to performance cars, Maruti Suzuki has found it really hard to establish itself in the Indian Market (remember Kizashi?) but does the Baleno RS packs everything to make a mark and compete against the direct rival, Polo GT TSI? Let’s see!! 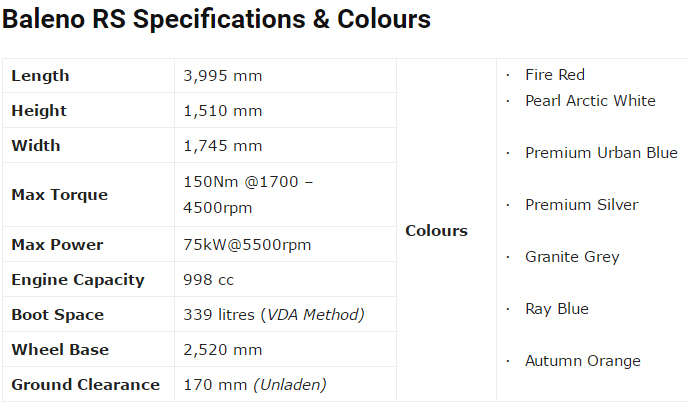 Despite the Maruti Suzuki Baleno RS looking almost similar to the original model, when the two cars are parked with each other, you can’t help but notice the distinct personality, creating a visual drama. The front and rear bumpers reflect more aggression with the new front grill. While the 16-inch alloys are the same that are offered with the non-RS version, the black paint provides the much-needed attitude to complement the overall look. Those who appreciate performance without much flash would love it but it doesn’t mean that Maruti Suzuki Baleno RS looks any elegant.

The only thing that doesn’t go with the overall rebel-like personality is the chromed front mesh grille, which is way too flashy for a sporty hatchback like this, having black as the prominent color.

Everything else remains unchanged and the buyer will get all the features found in the top-of-the-line non-RS Alpha variant, including turn indicators on projector headlamps, LED daytime-running lights, turn indicators on outside mirrors, LED tail-light cluster and UV-cut glass.

The moment you step inside, its very hard to differentiate between the RS and the original model, which is Maruti Suzuki Baleno RS’ biggest losing point. Except the RS badging on floor mats (not even the dashboard), everything remains the same. All-black interiors, TFT colour multi-information display, the dashboard layout, and the leather-wrapped steering wheel, are all the same. Contrast colour stitching for the upholstery, more sportier front seats, red accents rather than the all blue ones, could have been some welcome changes for the buyers.

Coming to space, Baleno RS’ cabin is a practical place to be in, all thanks to the original design. It is easy to find a good driving position, the rear bench is comfortable, well designed and ergonomic, easily giving all the C-segment sedans a run for their money. While the all black interiors go well with the overall design, it is nothing when compared to what VW Polo GT TSI has to offer.

This is where the Maruti Suzuki Baleno RS literally shines. The new 998cc, 1-litre, 3-cylinder Boosterjet petrol engine, developing 102PS of power and 150Nm of torque, is 18PS and 35Nm more powerful than what you get in the regular Baleno. It won’t take much time to realise what the car is capable of. The moment you release the clutch in the first gear, you can feel the eagerness. Thanks to a wide band for the peak torque is available (from 1,700 revs to 4500 revs), the Baleno RS changes pace quickly and doesn’t lose steam at the top as well. The rev heavy engine will bring all the 102 horses to play at the 5500 mark and will easily storm to the restricted 6,000 rpm, without breaking a sweat.

Maruti Suzuki Baleno RS touches 100kph in a little over 10 seconds, and boast a top speed of 180kph which is a blessing in disguise with an accurate steering wheel. The five-speed manual gearbox is a smooth shifter and the powerful performance from the turbocharged petrol engine will set your heart racing.

Buying Baleno RS for daily commute will be your best of bets. The engine feels great to use with virtually no turbo lag and you can easily cruise at 100kmph with the engine feeling relaxed. Shorter and slicker gear throws, especially the first three gears, will make your daily drive more exciting, with the rush of torque coming in from low revs.

Coming to a halt also won’t be a problem, thanks to the disc brakes on all four wheels. The Baleno RS uses the same tyres as offered with the Baleno’s Alpha variant (195/55 R16).

The claimed fuel-efficiency is 21.1kpl, which coupled with a 37 liter fuel tank, offers a range of 700km on a full tank.

Is the Maruti Suzuki Baleno RS really the hot hatch that we wanted? The answer is a simple ‘No’. Yes, it feels a hell lot quicker and eager for a floored acceleration and is more fun than the existing Baleno, but it failed to get our hearts racing to the uppermost levels. It’s an entry-level performance car that won’t disappoint you on your weekend road trips or those late-night stress-busting joy rides. However, it will never feel breathless due to its long power band and this extra bit of fun is something that differentiates it from a regular Baleno.

The Baleno RS is a bit expensive at Rs 8.69 lakh, as the similarly equipped standard Baleno costs around Rs 7.3 lakh and is a bit too close to the Polo GT TSI on the price list. While it doesn’t have the true racing blood of a Polo, the Baleno RS is still one car that can take you on a joy ride every day without taking a toll on your wallet.

However, a price tag closer to Rs 8 lakh could have done wonders for the car but the Baleno RS is the first almost-perfect attempt from the company and despite the premium that Maruti Suzuki is asking for, it still has all the goodies for becoming another best seller.